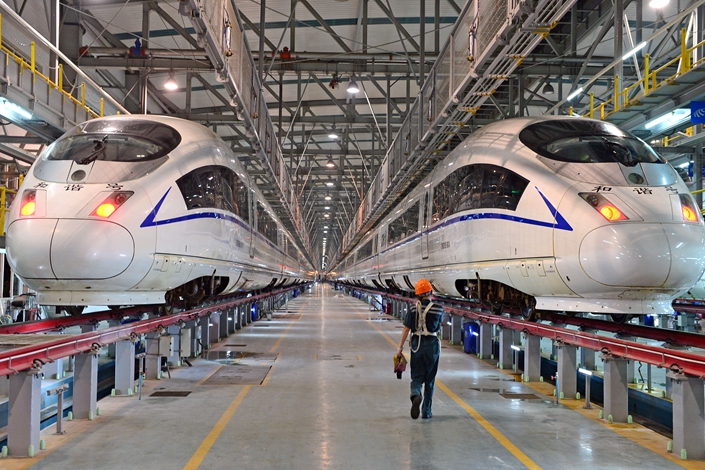 (Beijing) — China’s rail operator reported the first decline in malfunctions in four years on its high-speed train network in 2016, as it gains experience and works more closely with suppliers to improve technologies that could one day become a major export.

The malfunction rate for high-speed trains dropped by 15% last year, marking a major turning point for a national network that includes more than 22,000 km of track costing more than 4 trillion yuan ($580 million).

The figures were unveiled and discussed at an internal meeting of officials from China Railway Corp., operator of the nation’s rail network, Caixin has learned.

The 15% decline reversed a rise of more than 20% from a year earlier.

“Some of the problems didn’t lead to serious consequences, but they still created dangerous conditions,” a railway insider told Caixin, speaking on condition of anonymity.

China’s ambitious high-speed rail program has served a number of functions, including providing a major source of government-led infrastructure spending to boost regional economies over the last decade. At the same time, development of such a large network has helped put China at the cutting edge of high-speed rail equipment and related technology, with leading manufacturer CRRC Corp. Ltd. aggressively bidding on contracts to export its know-how overseas.

But safety and reliability have been a concern for both domestic and international buyers due to the newness of China’s industry. Those issues were on prominent display in 2011, when a high-speed rail crash near the city of Wenzhou resulted in 40 deaths and accusations by some of a cover-up. Following that accident, the rail operator took steps to improve safety, including lowering the maximum speed of trains.

The improved malfunction rate comes as China Railway becomes more experienced at handling the technology, and also works closely with CRRC when incidents do occur. In 2016, 7.4% of all train malfunctions were due to problems related to actual rail cars, and about 80% of those were due to quality issues, according to the operator’s report.