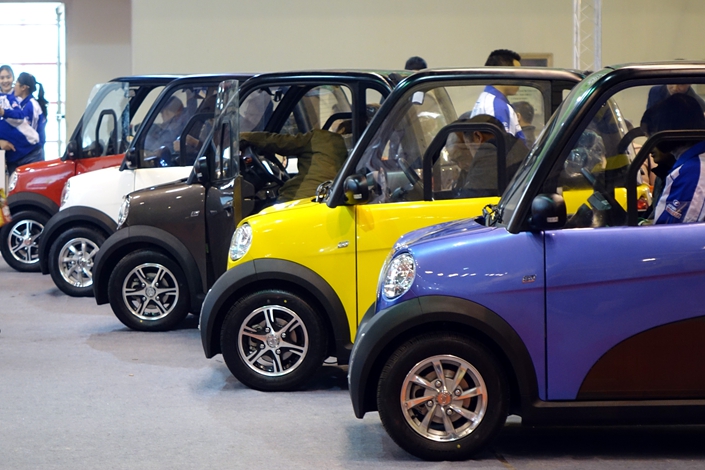 Quadricycles are displayed at the Green Auto China show in Zhengzhou, Henan province, on March 10, 2015. Thirty-two Chongqing delegates to the National People's Congress have suggested classifying the vehicles as motorcycles, which would legalize them and end the uncertainty surrounding their status. Photo: Visual China

(Beijing) — That “beep-beep” coming from behind on a dusty country road could be coming from a type of four-wheel electric vehicle that’s tremendously popular in Chinese villages.

Inexpensive, factory-built “quadricycles” have been around for years and can run at speeds of up to 70 kph.

But quadricycles have yet to be legalized in China, as government officials are still debating whether to classify them as cars, which would require they meet certain safety and manufacturing standards; or as motorcycles, for which standards are less restrictive for both manufacturers and consumers.

The proposal’s goal is to promote clean, convenient transportation, the report said.

The government has reacted slowly to rising sales of quadricycles, which can be operated without license plates and cost no more than 30,000 yuan ($4,350).

But manufacturers are still building quadricycles without a unified set of industry standards. Proposed standards are now under discussion, but the talks have been repeatedly interrupted in recent years by debates over how to identify the vehicles.

The lack of standards and the vehicle’s legal status have prevented the industry from expanding to meet demand, said Tu Jianhua, one of the 32 Chongqing lawmakers who is also chairman of a quadricycle plant investor, Loncin Holdings Co. Ltd.

Nevertheless, demand has been strong. Sales of the vehicles grew 50% last year to about 1.5 million units, according to the China Society of Automotive Engineers.

Some industry experts think quadricycles should be classified as cars, given their relatively high top speed. But others worry such a classification would wipe out some lower-end producers and raise consumer costs.

Some, including Tu, argue that the vehicle’s customers are price-sensitive, and that it would be convenient for transportation authorities to supervise if they’re categorized as motorcycles.

Classifying them as motorcycles would require agreements and coordination among several government agencies, said Dong Yang, managing director of China Association of Automobile Manufacturers, who is also leader of a government team working on writing industry standards for the vehicle.

Dong said a practical solution to the classification issue — and thus the vehicle’s legal hurdle — would be to create an all-new vehicle category for quadricycles.

Dong is an adviser to the team, which held two seminars late last year while working on building a framework for future standards.