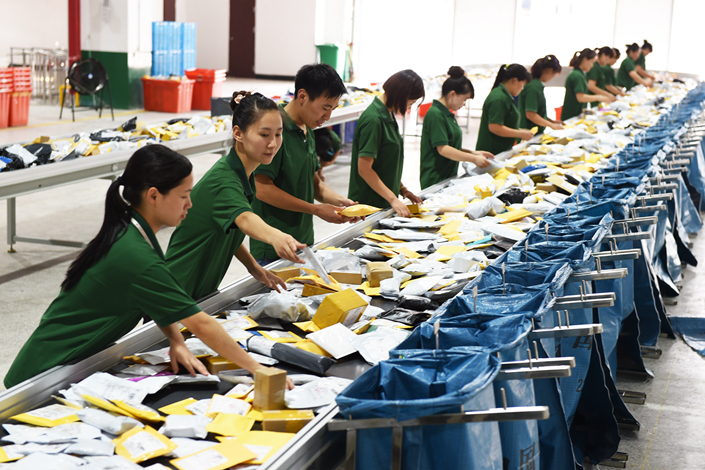 Workers at the cross-border e-commerce branch of China Post in Yiwu, Zhejiang province, sort parcels in July. The Chinese government has unveiled new delivery guidelines for the state-owned enterprise, which is struggling to compete with faster, more-convenient delivery services. Photo: Visual China

(Beijing) — Snail-mail purveyor China Post is looking for a new shell as it tries to shed its image for reliable but slow deliveries.

New guidelines from Beijing are aimed at quickening the pace at China Post Group Corp. as it struggles to maintain its relevance in the nation’s fast-evolving parcel delivery sector. The former mail monopoly’s problem is being felt by peers around the globe, but seems more acute as the postal leftover from China’s history of state-owned enterprises tries to compete with a much younger field of private-market-oriented rivals.

The largest of those competitors, SF Express Co. Ltd., minted the nation’s newest billionaire last week when it went public through a backdoor listing in Shenzhen. Since then the stock has soared on each successive trading day, giving founder Dick Wong a net worth of more than 180 billion yuan ($26.2 billion).

China Post hasn’t minted any billionaires yet, but instead is better known for its huge national network of 40,000 post offices and deliveries that are reliable, if not always the quickest.

In an effort to change that, Beijing has rolled out a sweeping array of new guidelines aimed at making the national mail carrier a more-attractive alternative to companies like SF.

The guidelines, which took effect Wednesday, say that 95% of all letters, packages and printed materials must arrive at their destination within three days for intracity addresses, and five days for intercity. Target delivery times to smaller towns and villages, which could previously take as long as 20 days, are also being reduced from 20% to 50%.

Additionally, China Post will now deliver packages to actual residences in all major cities, ending an older system in which people usually received a slip in their mailbox, exchangeable for the actual package after a trip to the post office. In acknowledgement of China’s growing ties with the rest of the world, every county-level town will now be required to have at least one post office capable of handling international mail, and every village-level town must have a package pickup center.

While the new times are an improvement over the past, they are still well below levels offered by the likes of SF, YTO Express and Yunda Express, which deliver more quickly and offer pickup and delivery services directly to offices and residences in major cities.

“The post office isn’t exactly pushing its limits, raising the bar to three days, when private couriers offer same-city delivery within hours, or less if we’re talking about grocery delivery services,” said Cai Lili, a logistics analyst at consultancy Analysys. “Consumers wouldn't even think of using the post office to deliver daily goods they bought online because the wait is too absurdly long.”

Cai added that it’s good that China Post is trying to become more competitive, showing it wants to improve. But he added that most customers in post offices these days are older people who aren’t tech-savvy enough to order through e-commerce and to use online tracking systems favored by the new generation of private couriers.

One place China Post remains competitive is in price, at least for letters. A letter sent domestically costs just 1.2 yuan, compared with about 10 yuan from most of the private couriers. But such savings won’t mean much to a younger generation that seldom sends letters anymore, and prefers to communicate by email, which is delivered instantaneously and for free.

China Post’s falling position is clear in its delivery statistics, which are all dropping rapidly. Package deliveries slid the most, tumbling by 40% in last year’s third quarter, while even letter deliveries were down 21%. Despite that, the post office managed to post 8.1% revenue growth in 2015, the latest year for which data was available, with the figure reaching 438 billion yuan.