By Li Rongde and Zhou Qijun 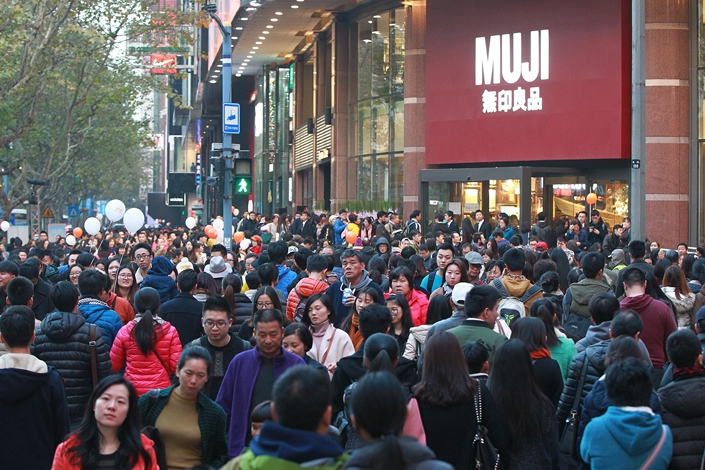 Muji's Chinese flagship store opened in Shanghai on Dec. 12, 2015. A CCTV news program said that Muji store in Shenzhen was caught selling foodstuffs from Tokyo, although Chinese authorities have banned the import of food and agricultural products from there since 2011. Muji China denies the food originated from Tokyo. Photo: Visual China

(Beijing) — China’s state broadcaster has named and shamed a series of Japanese vendors, including the retail giant that owns Muji, for importing goods from areas affected by the 2011 Fukushima nuclear disaster.

Baby formula, cereal, rice and spirits imported from Japan by several companies were produced in regions that had been blacklisted by China’s food safety authority, according to the investigation. But the show’s producers didn’t have the products tested in an independent lab, nor did they claim they were contaminated and posed a health risk.

The two-hour show, known as The 3.15 Evening Gala, is similar to CBS’ news program 60 Minutes, albeit interspersed with song-and-dance routines to push up ratings.

In one segment, police in the southern city of Shenzhen said Ryohin Keikaku Co., the Japanese retailer that owns the popular Muji retail chain, was caught selling foodstuffs, including packaged egg pan cakes, from Tokyo. Chinese authorities had banned the import of food and agricultural products from Tokyo and nine other regions of Japan affected by nuclear contamination after an earthquake and tsunami in March 2011 damaged the nuclear power plant in Fukushima prefecture.

Muji had listed Japan as the place of origin without giving further details on the product’s Chinese label, according to CCTV.

But Muji China dismissed the accusation as a misunderstanding, saying the name of the place printed on its package is not the origin of the products, but simply the address where its parent company is registered.

Zhong Ke, a food-safety specialist in Beijing, said the list of banned Japanese regions simply served as a precaution, and there was little radioactive contamination in Japanese imports. “The contamination (in them) is not higher than the radioactive exposure in other aspects of our daily lives, such as traveling by plane,” he said.

The show also pointed a finger at Aeon, another Japanese supermarket chain, with outlets in several Chinese cities. Rice labeled as “a product of Okinawa” found at a Shenzhen outlet of Aeon was actually from Niigata prefecture, another blacklisted area. Aeon apologized on Thursday for selling the imports in its store.

The company was able to circumvent the customs authority by bringing the banned foodstuffs into bonded areas without customs clearance and selling them to customers online and delivering them via courier services.

A company manager for Dolphin who wished to remain anonymous told the local government Market Inspection Bureau that the company had sold 99% of its imports to other online retailers in China.

Dolphin issued a statement on Feb. 23 saying it had sold 525 illicit items bearing the Calbee brand in the 10 days after China’s quality inspection administration released a directive that tightened requirements for documenting radiation levels from Japanese foodstuffs.

It offered an apology for selling the products of questionable quality and said it had recalled all items violating government rules.

In response to a Caixin inquiry, the Japanese Embassy in Beijing said in has taken notice of what has been reported in Chinese media and “is actively collecting relevant information.”

China joined a host of other countries, including the U.S., that banned imports of foodstuffs and agricultural products from Japan after the Fukushima disaster. But the U.S. Food and Drug Administration has a more-specific list of Japanese regions from which certain products are banned. The U.S. agency has also maintained close contact with the Japanese government in monitoring radioactive levels in food originating from affected areas.

The annual CCTV program has been marred in controversy as its producers were sometimes accused of singling out big domestic companies and multinationals as leverage to sell ad time to them, an allegation the state broadcaster has denied.

Apple Inc. was forced to make a rare apology in 2013 after CCTV criticized its poor after-sales services in China.

This year, the only big name included was Nike Inc., which was accused of false advertising. The sporting-goods giant had claimed a certain line of sneakers had Zoom Air sole cushions inside when they did not, according to the broadcast. Nike China was not available for comment, but a Nike employee admitted in an interview with the Chongqing Morning Post on Thursday that “the company had made incorrect claims about the product on its official website” and was offering a full refund and a voucher with a 25% discount on any single purchase on its site as an apology.