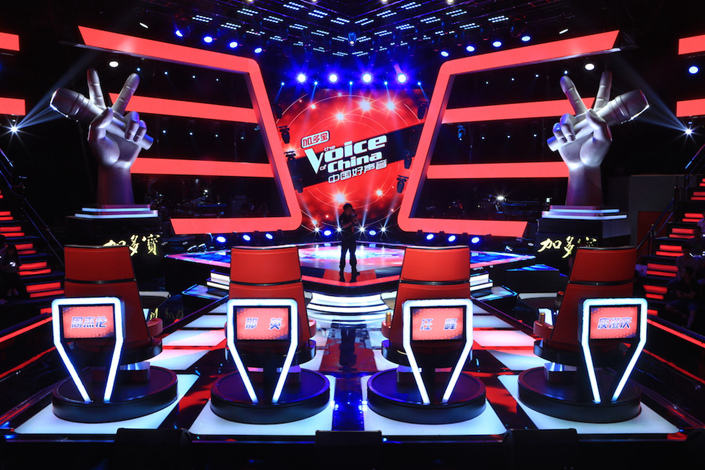 A technician prepares for a filming session of the fourth season of Chinese reality talent TV show 'The Voice of China' in Jiaxing city, Zhejiang province, June 16, 2015. Photo: IC

(Beijing) — An intense legal battle between the Chinese company that produced the hugely popular TV show The Voice of China and a Dutch company that created the original “Voice of” franchise has ended, with a Hong Kong court ruling in favor of the Dutch firm.

The Hong Kong International Arbitration Center on Monday said Talpa Global, owner of the original format of the show, had the rights to the Chinese language title “Zhongguo Hao Shengyin” or The Voice of China.

The singing show with pop king Jay Chou as its top judge was among the highest rated TV variety shows in China in 2015 — the last time it was aired, according to Nielsen-CC data, a Beijing-based data company.

Talpa, owned by British broadcasting giant ITV, took Star China Media, which produced the first four seasons of the show, to court after the Shanghai-based producer continued with auditions for a new season even though its partnership with Talpa had expired in January 2016.

Star China Media said it had renamed the show 2016 The Voice of China, in effect distinguishing it from the original title. It also tinkered with the logo, removing a familiar symbol with a hand holding a microphone.


But Talpa had already inked a $60 million contract with another Chinese production company Talent Television and Film Co. Ltd. in Zhejiang to produce seasons five to eight after Star China refused its new franchise terms. “This show is becoming popular every year and it is natural for prices to rise, and no country is an exception,” Talpa’s chief executive Pim Schmitz said in an April press conference in Beijing. “However, we found that our partner, in its contract proposal for the fifth season, wanted to pay a fee lower than for the second season.”

Weeks before the copycat show was to be aired, The Beijing Intellectual Property Court told Star China Media that it must “immediately cease using the name The Voice of China in all publicity, promotions, auditions and advertisements for its singing competition talent show,” according to court filings. The ruling was in response to a filing by Talpa’s local partner Talent International.

This pushed Star China Media to hastily rebrand the show as Sing! China, and it hit the airwaves in July. But TV ratings for the knockoff show failed to match those of the original.

Like the Idol and X Factor franchises, more than 60 versions of The Voice have been produced around the world, in countries ranging from Brazil to Germany, Nigeria and Afghanistan.

But is the recent ruling good news for fans of The Voice of China?

“Arbitration rulings issued in Hong Kong must first be approved by a court on the Chinese mainland, before they can take effect here,” said a spokesperson for Talent International who spoke on condition of anonymity. “And this takes a long time.”