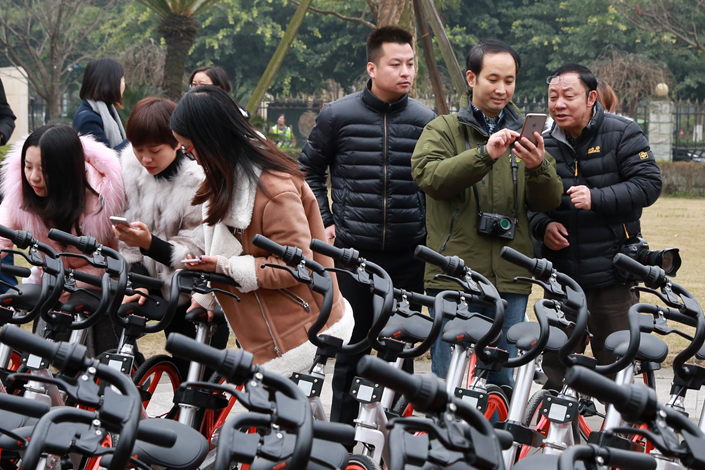 Bicyclists check out Mobike offerings for rent in Pengzhou, Sichuan province, on Jan. 24. Beijing Mobike Technology Co. Ltd. has announced a "strategic partnership" with China Merchants Bank in which the bank will handle the bicycle deposits Mobike gets from its users. Photo: IC

(Beijing) — China’s major bike-sharing company has invited a commercial bank to oversee its huge deposits of cash after state broadcaster CCTV aired a television segment that questioned how the money was used and criticized some of the terms of the bike contracts.

Mobike’s introduction of a third-party supervisor comes only a week after CCTV rapped bike firms for “profiting from a gray area” through unbalanced conditions for users, and for failing to explain the use of deposit capital.

Firms that are part of China’s recent bike-sharing craze typically require each user to pay a deposit of 100 yuan ($14.60) to 400 yuan before they are permitted to pedal away on one of the brightly colored orange-and-gray bikes proliferating on streets and sidewalks.

Though refundable, firms usually give themselves three to seven days to return the deposits to users’ bank accounts, while users are barred from renting bikes the minute they withdraw their deposits.

Despite the relatively small amounts required, bike-sharing firms such as Ofo and Mobike are sitting on an abundance of interest-free capital, when multiplied by the number of users.

There are currently no regulations regarding how these pools of cash should be monitored and used, said Cao Lei, director of China’s Ecommerce Association.

“It would be a huge waste of resources if cash is just sitting there, but there is a risk that they could be unwisely used for overly risky investments,” he said.

Ofo, the other main bike-sharing contender, has yet to invite a third party to manage its deposit coffer of approximately 200 million yuan, with 20 million users and a 99 yuan deposit rate.

Mobike, which asks for 299 yuan, would not reveal registered user numbers, only stating that it had 6 million weekly active users. Data from consultancy Talking Data in December showed that Mobike had four times the number of downloads as Ofo.

Mobike collected 900 million yuan in deposits in the city of Guangzhou alone, according to CCTV calculations.

Even with an interest rate of only 3%, the firms could receive tens of millions of yuan in interest each year, with consumers footing the bill.

“No company has come clean with an explanation of where and how these funds are being used,” says Wang Chenxi of consulting firm Analysys. “Naturally, users will be concerned about the safety of their deposit should these companies default.”

The Shenzhen government has drafted guidelines to get a tighter rein on bike-sharing companies, with a blueprint to adopt supervision mechanisms for deposit reserves to ensure that funds are not misused.

But as firm such as Ofo and Mobike raise and spend billions of yuan in the bike-sharing craze, charging users 1 yuan for an hour’s ride, returns from the massive deposit accounts may for now be a crucial source of income.

“We can’t blame bike-sharing companies for trying to make some money off the deposits,” said lawyer Dong Yizhi of the Yatai law firm. “But the end is near for them if investment income becomes essential to their bottom line.”