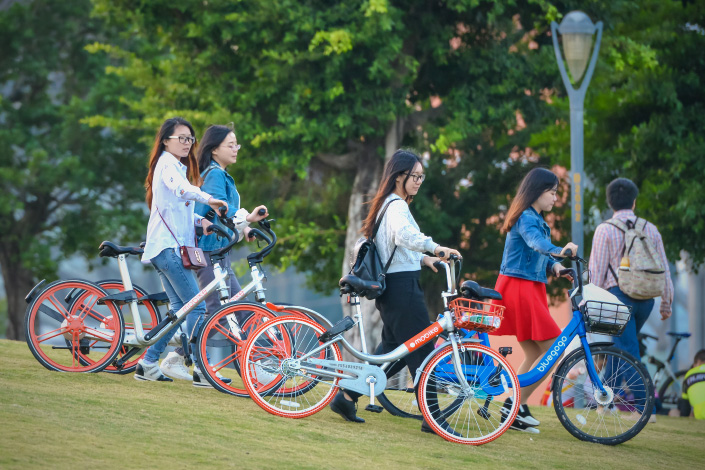 Bicycle sharing is becoming increasingly popular in Shenzhen, Guangdong province, as a growing number of people use the rental bikes for short-distance travel. Photo: Visual China

(Beijing) — China’s southern tech hub of Shenzhen has become the first city to lay ground rules for the raging bicycle-sharing business in an effort to keep in check careless parking and the number of vehicles, as well as to get a tighter rein on rental firms.

A draft rule issued by the Shenzhen government on Wednesday would require shared bikes to be parked in an orderly manner within designated zones or slots. It also stipulates that the number of bikes operating in the city must not “exceed transport capacities,” which could eventually mean a bike-sharing quota.

In order to track violations by individual users of the thousands of loaner bikes popping up on Shenzhen streets, service operators like Ofo and Mobike would be required to set up a credit-style system to monitor their respective subscribers.

Services offering rental bikes that can be parked anywhere when the user is finished have become the latest trend, taking China’s largest cities by storm. But such bikes are fast becoming a nuisance for pedestrians and chengguan, or law-enforcement officers, since negligent users often leave the bikes in inconvenient places such as propped against road dividers or haphazardly strewn along sidewalks.

Last week the interior Chinese city of Chengdu began setting aside special parking zones, and prohibited all bikes from parking within 30 meters of a subway entrance. The Shanghai railway police earlier reprimanded rental firms for poorly educating their users on parking etiquette.

Shenzhen is responding to a slew of Mobike and Ofo bikes that have arrived within the last month. Fueled by abundant amounts of venture cash, the two largest bike-sharing companies have been expanding at breakneck speed, and plan to flood Shenzhen with 160,000 new bikes, enough to fill up a 50-km sidewalk strip.

The new regulations will also try to ramp up administrative control over bike-sharing operators, requesting that they provide third-party insurance coverage, daily maintenance, quality inspections and customer service support. Firms that ask for a deposit will be subject to supervision to ensure funds are not misused, according to the draft guidelines.

Bike-sharing companies are eager to play an active role in shaping regulation from an early stage, reaping lessons from private car service peers who are now facing rules that will disqualify many of their drivers in some cities. “We will actively work with the government to draft rules, drawing from our experience,” Ofo said in a statement.

Shenzhen also took the lead in launching one of the nation’s heaviest crackdowns on motorbikes and scooters in April this year after streets and sidewalks became flooded with takeout dining and parcel deliverymen. However, the city’s residents complain on social media that those bikes and their reckless drivers are as rampant as ever.