By Coco Feng and Liu Xiaojing 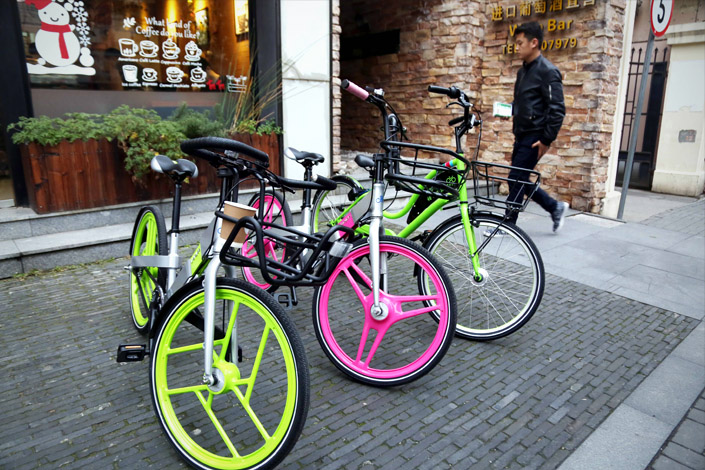 Bicycles developed under a partnership between bike-sharing service platform U-Bicycle and Zhonglu Co. Ltd., maker of Forever bikes, are shown in Shanghai on Tuesday. Photo: IC

(Beijing) — Two of China's most famous bicycle brands, Phoenix and Forever, will leverage their names in bike-sharing services, joining a crowded field that has helped revive the nation's pedaling tradition.

Meanwhile, Zhonglu Co. Ltd., whose Forever bikes were so coveted that people used them as dowries in the 1970s, announced this week that its models will appear on the streets of Shanghai next year in a new partnership with startup U-Bicycle.

Unlike shared-bike services in many global cities, the new generation of Chinese apps like Ofo, Mobike and U-Bicycle don't require bike racks. Instead, users are free to pick up and park bicycles wherever they want, using mobile technology to lock and unlock them. Riders are then charged small amounts based on distance traveled or time of use.

U-Bicycle's new sharing network will cover 52 Chinese cities by the end of next year with 2.8 million Forever bikes, U-Bicycle founder Yu Yi said. He added the app's primary focus will be first-tier cities Beijing, Shanghai and Guangzhou, as well as the Yangtze and Pearl River Deltas.

As the first destination, Shanghai will see 150,000 to 200,000 new Forever bikes, which will be colored in a distinctive green and pink. By comparison, Mobike is known for its orange bikes and Ofo for its yellow ones, while Xiaoming is known for its sky-blue coloring.

"Overseas editions of Ofo's trademark little yellow bikes will be tailored in accordance with the height, body shape and riding habits of people in Europe and North America," he said. "The exteriors will be larger than the Ofo bikes in China."

The past year has been a watershed for China's bike-sharing industry, helping to revive a tradition that was once the main form of transportation for most Chinese. As late as the early 1990s, legions of bikes were a common sight on most streets, sporting names like Phoenix, Forever and Flying Pigeon.

But biking has experienced a rapid decline over the last decade, as cars and modern transportation systems became more favored forms of getting around.

A previous version of the story incorrectly identified Zhonglu as an owner of one of the new bicycle networks.