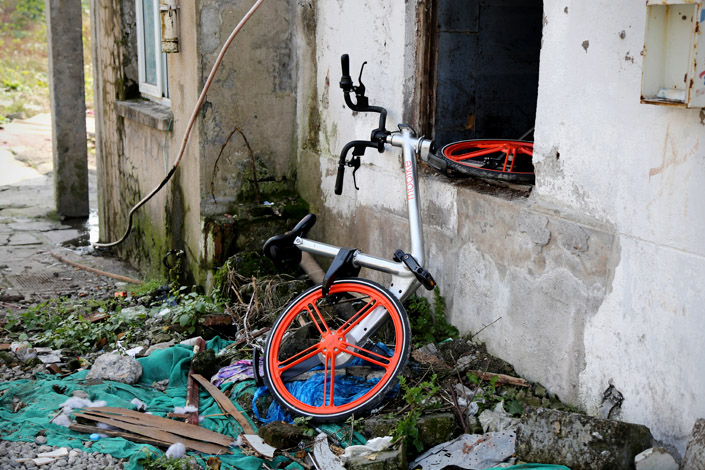 A broken Mobike lies in a residential community in Shanghai's Putuo district on Nov.28. As Mobike and Ofo shared bicycles, which can be unlocked with a smartphone app and left anywhere after use, have become popular in many large cities, more of the bicycles are being stolen and sold online. Photo: Visual China

(Beijing) — Bike trafficking has become a bump in the road for bike sharing, China's latest venture-backed fad, as stolen shared bikes have begun to emerge on online secondhand markets.

Ubiquitously strewn on the sidewalks of China's major cities, shiny Ofo and Mobike bicycles, which cost about 350 yuan ($50) and 3,000 yuan respectively to make, have fallen prey to theft and illegal sales.

An online dealer in south China is soliciting stolen Mobikes for 2,000 yuan apiece on secondhand sites, while Ofo bikes have cropped up on used-goods platforms at 99 yuan each, a Sina Weibo user discovered on Friday.

Secondhand platforms have responded to the illegal sales by pledging to police bike-trafficking information. Posts trading in shared bikes have been deleted.

China's largest classified-ads platform, 58.com, stated that it will block all posts related to Mobike and Ofo on its used goods app, Zhuanzhuan. The site also threatened to shut down accounts that attempt to buy or sell shared bikes and to report such cases to the police. Similarly, Alibaba Group Holding Ltd.'s secondhand trading platform, Xianyu, said it has banned sales of the bikes.

"Theft and vandalism will always be a sore subject for these bike-sharing companies, and it will weigh on the costs," said Wang Chenxi, an analyst at Beijing-based consultancy Analysys.

"There's no real way to terminate the problem," she added. "If people are going to steal them, they will find a way to do it, no matter what."

The media have reported incidents of shared bikes being thrown into rivers, sold for scrap metal and confiscated by local law enforcement. Early this month, a man in Shanghai was sentenced to three months of detention for stealing a Mobike.

"Mobike and Ofo are vanguards of the sharing economy, which is highly reliant on a favorable environment and the fostering of user conduct," said 58.com in a statement emphasizing that moral discipline is a prerequisite for the bike-sharing model.

An Ofo spokesperson declined to comment on whether bike sharing will survive in China, where manhole covers and electric cables are commonly stolen and sold for scrap. "Bike sharing faces the same user conduct challenges in any nation," he said.

Ofo plans to actively discourage theft by installing upgraded GPS locks that will alert the platform when the bikes are in an "anomalous location." Mobike bikes are already equipped with tracking gear.