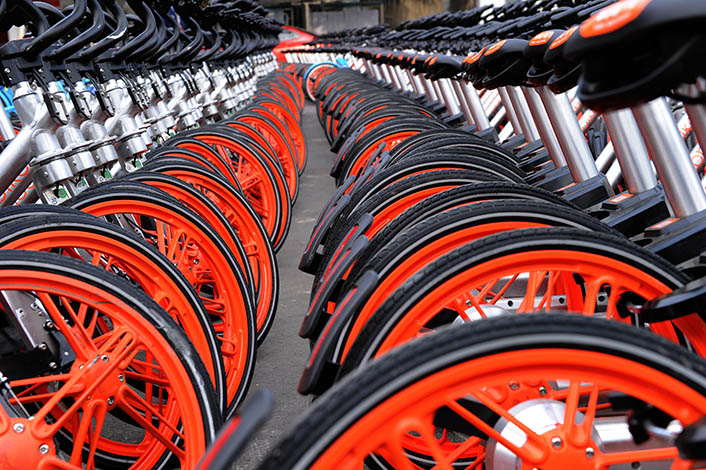 (Beijing) — The bike-sharing business, China’s new hotbed for venture cash and controversial sidewalk clutter, could be reined in during the months ahead, as authorities contemplate nation-level regulations for the business.

The Transport Ministry is soliciting opinions from industry observers and market players, sources who were consulted on the matter told Caixin. Such a move could lead to nationwide guidelines to regulate the bike-sharing sector, analysts said.

The central government is considering action as individual cities take their own steps to curb the roaring business, which has cluttered sidewalks in the process of providing “last mile” riding convenience. Such services allow people to unlock bikes wherever they can find them using a smartphone app, and then ride and park the bikes anywhere for a small fee.

Two sources told Caixin they were recently consulted by ministry officials for their views on regulation of the sector. One of those, Shanghai-based analyst Yun Bin, said he expects the ministry may be getting ready to draft national guidelines. Those would set industry standards, including enforcement of responsible user conduct, and might be announced as early as July, he said.

The Transport Ministry has been considering the matter since the second half of 2016, when the industry began to explode.

“After months of research and surveys with firms and localities, general guidelines for the industry may roll out soon, though they will be very rudimentary,” Yu said.

“Local interpretation and enforcement will play a larger role than the national guidelines,” he added. “Many cities have vested interest in the field with municipal bike-sharing programs,” he said, referring to nonprofit public shared-bike projects that many cities have rolled out in recent years.

In many cases, the government-led projects, which require bikes to be retrieved from and returned to designated stations, have been far slower to win consumer favor than private and tech-savvy operators whose bikes can be freely parked.

But negligent parking, with bikes from the newer services propped against road dividers or haphazardly strewn along sidewalks, has frustrated pedestrians and urban-management personnel.

Guidelines under discussion may stipulate that there must no more than 1 shared bike for every 100 people in the population, according to a report from news portal Sina. Meanwhile, cities may be limited to choosing three shared-bike services to thwart excessive competition and waste of resources, the report said, quoting people familiar with the matter.

Neither Ofo nor Beijing Mobike Technology Co. Ltd., the two largest contenders in the market, would comment on the potential for regulation, though both reiterated that they have maintained good communication with local governments.

Some municipalities have already taken steps to bring order to the bike-sharing frenzy. Last month, Shenzhen became the first city to introduce ground rules for the sector, requiring that bikes be orderly parked within designated zones or slots, and implying a limit on bike volume.

The interior city of Chengdu has set aside special parking zones, and prohibited all bikes from parking within 30 meters of subway entrances, while the major southern metropolis of Guangzhou included “introducing bike-management guidelines” in its annual work report last week.