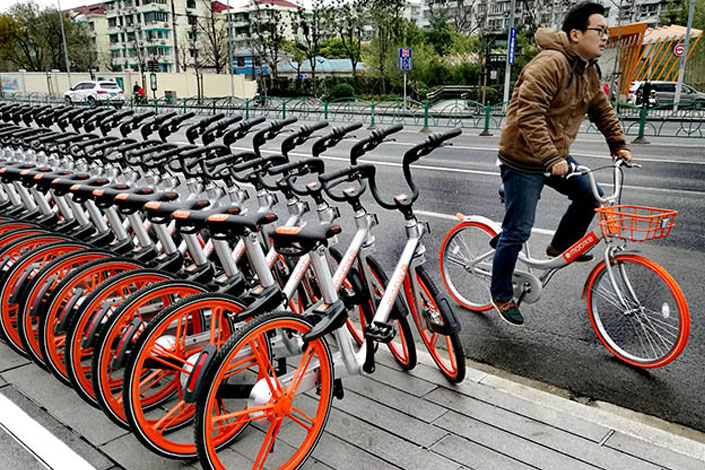 A man in Shanghai rides a Mobike Lite, a recent upgrade to the bicycle-sharing company's Classic Mobike model, such as those on the sidewalk, on Dec. 20. Photo: IC

(Beijing) — Bicycle-sharing service operator Mobike has raised $215 million in new funding, providing fuel in its race with a growing field of rivals that are riding a bike revival in China.

Beijing Mobike Technology Co. Ltd., one of the earliest arrivals to China’s latest bike-sharing craze, is known for its stylish orange and gray bikes on sidewalks throughout major cities like Beijing and Shanghai. Its service allows subscribers to borrow its bikes anywhere they can find one and then park them wherever they want, with a small fee deducted for time of use.

This round of fundraising was the fifth for Mobike in just the last five months as investors have flocked to the sector. Mobike will use the money to drive its expansion into more markets both at home and abroad, said Davis Wang, the company’s co-founder and CEO.

“Mobike has the most sophisticated smart bike-sharing technology globally, and we look forward to bringing bikes to more cities around the world in the months ahead as we ramp up our expansion into more cities in China and internationally,” he said.

Since launching its service last year, Mobike has expanded into nine cities across China and distributed more than 100,000 of its bicycles. The company also plans to expand into Singapore in one of its first moves outside China.

Mobike’s new funding and word of its expansion plan come just weeks after chief rival Ofo, known for its yellow retro-style bikes, unveiled its own international expansion road map that will feature initial stops in London and Silicon Valley, California.

Both companies, along with others like U-Bicycle and Xiaoming, are jumping on a craze that has seen thousands of bikes flood onto the streets of major Chinese cities over the last six months.

While bikers welcome the convenience, pedestrians and others who use sidewalks complain the huge number of new bicycles is becoming a growing nuisance due to careless parking and the bicycles’ cluttering pedestrian walkways. In the southern boomtown of Shenzhen, Mobike and Ofo are planning to add a combined 160,000 new bikes to local streets — enough to create a 50-km-long line of bikes if laid end-to-end.

A growing number of cities are contemplating measures to better regulate the sector’s growth, and last month Shenzhen became China’s first city to lay ground rules for the business.