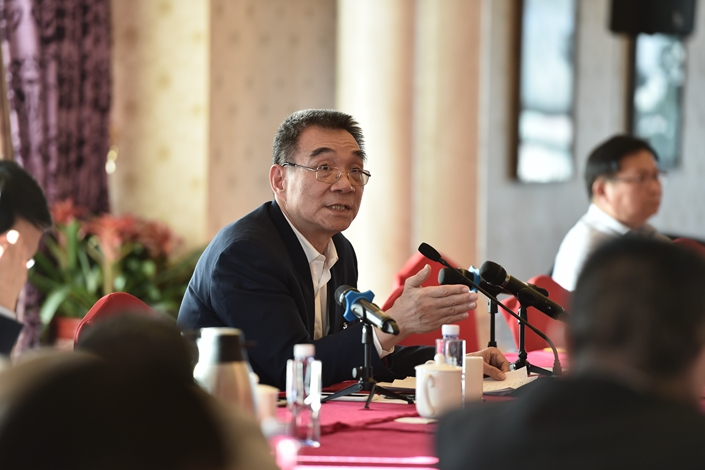 Justin Yifu Lin, a member of the Chinese People's Political Consultative Conference (CPPCC) and a former chief economist of the World Bank, speaks during a group discussion that took place on March 6 during the joint meetings of the National People's Congress and the CPPCC in Beijing. Photo: IC

(Beijing) — The government is overestimating how much private capital it can attract for infrastructure construction, a former chief economist of the World Bank said.

The country should still rely on government investment to finance infrastructure projects, even if it may lead to fiscal deficits to exceed the internationally recognized cutoff of 3% of gross domestic product (GDP), Justin Yifu Lin told Caixin in an interview.

Since late 2013, the Chinese government has increasingly turned to public-private partnerships — in which private investors help governments fund infrastructure projects — as it seeks to maintain economic growth while its fiscal firepower fizzles. Meanwhile, authorities are also trying to contain risks in off-balance-sheet local government debt, which is a traditional key source of funding for infrastructure investment.

About 15 trillion yuan ($2.17 trillion) was invested last year in railway, airports, bridges and other infrastructure construction in the country, and that number could rise to 18 trillion yuan this year, analysts have estimated.

Lin expressed skepticism that private investors will want to rush into such partnerships because infrastructure projects often take a long time to pay off, and he also worries that the ones they favor will be monopolies that don’t best serve the public interest.

“Private investors have their limits,” he said in the interview.

“I don’t think private investment can be a good solution to (the funding conundrum of) infrastructure projects,” he said.

“A lot of infrastructure constructions are not what private-public partnerships (PPPs) are willing to invest in.”

Even if private companies do chip in, they may be interested only in lucrative projects like telecom networks, harbors and highways that have the potential to become monopolies. However, the economy will be harmed if those facilities are monopolized, he said.

“Businesspeople are after monopoly profits, and their fortunes built on monopoly profits will in turn make it possible for them to interfere with the government’s policy-making,” he said, referring to Mexican telecom tycoon Carlos Slim Helu as an example and blasting such investors for “hijacking” their respective governments.

Official figures showed that 277 “national showcase PPP projects,” which are under the oversight of the Ministry of Finance and are supposed to set a benchmark for all PPP deals, had started and published information of their nongovernment investors by the end of 2016.

More than half of the 419 nongovernment investors of these projects were either solely state-owned companies or controlled by state capital, and only 39% were Chinese private companies, with the rest being overseas firms, the data showed.

Lin argued that government spending should remain the mainstay for infrastructure investment, especially amid economic downturns.

“I prefer to (increase) the fiscal deficit to invest in infrastructure construction,” he said.

“The private sector’s will to invest will certainly decline on gloomy economic outlook when growth slumps. But if the government uses its fiscal resources to invest and prop up growth at a reasonable rate, market projection of economic prospects will turn around, and (private) investment will get active.”

Local authorities in China have depended heavily on shadowy borrowing through tools like local government financing vehicles to fund infrastructure projects to drive growth because they were prohibited from issuing bonds directly until 2014.

The opaque off-balance-sheet debt has ballooned and most of it has short-term maturities, sparking growing concerns over possible defaults at a time when increases in government fiscal revenues have continued to weaken as GDP expansion has slowed for years.

Local government’s debt-to-GDP ratio was 40% last year, including the off-balance-sheet liabilities, and the net debt level was even lower because the borrowing was asset-backed. The combined debt of central and local governments was less than 60% of GDP, he said.

“Therefore, we should have the option to use investment infrastructure as a countercyclical tool during economic (growth) slowdowns if we can resolve the financing channel problem,” he said.

In 2016, China for the first time budgeted a fiscal deficit of 3% of GDP, hitting the ceiling set by the European Union for its member states.

But Lin dismissed the 3% cap as having a “lack of a theoretical basis.”

“What is crucial is where fiscal budget is spent in,” he said.

“It will be a pure debt if it is used to just pay for welfare to support consumption. But it will be an investment if it is spent in infrastructure construction to remove growth bottlenecks because economic expansion potential will be improved in the future and the government’s debt-paying ability will be enhanced on fiscal revenues increases,” he said.

“I think the ‘ceiling’ can be surpassed when necessary.”

Premier Li Keqiang announced earlier this month that the government will keep deficit budget at 3% of GDP this year, as it targets achieving an economic growth of “about 6.5%, or higher if possible in practice.”