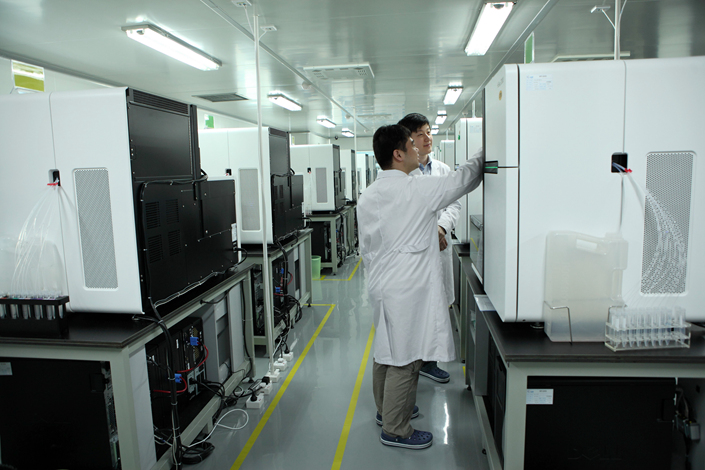 Researchers work in a lab in the BGI Genomics Co. building in Shenzhen, Guangdong province, on March 3, 2011. BGI plans to have an initial public offering on the Shenzhen Stock Exchange's ChiNext board after several failed attempts to list on the Nasdaq and Hong Kong stock exchanges. Photo: IC

The world’s largest provider of genome sequencing services is planning to raise 1.73 billion yuan ($251 million) on Shenzhen Stock Exchange’s Nasdaq-style ChiNext board, according to a prospectus filed Tuesday evening.

The 16-year-old Chinese biotechnology group began as a government-funded laboratory, and started to commercialize its findings in 2012. Since then the genome giant has been a hotbed for institutional investment, with financing from China Life Insurance Co., Ltd., Citic’s Goldstone Investment, billionaire Jack Ma’s Yunfeng Capital, and SoftBank China Capital.

BGI has long aspired to have an IPO, under pressure from venture capitalists, but previous plans to list on the Nasdaq and Hong Kong exchanges have been hindered by China’s foreign-investment regulations, industry observers said.

The latest Catalogue for the Guidance of Industries for Foreign Investment, published in 2015, lists “applications and research in human stem cells, gene diagnosis and treatment” among the sectors where foreign capital is strictly forbidden.

“These trade restrictions have made it very difficult for BGI to list via a V.I.E. structure,” said Li Yanmei, a lawyer at Dacheng Law firm. “These barriers, combined with the higher domestic valuations for tech companies, likely prompted BGI to shift to Shenzhen.”

A V.I.E., or variable interest entity, structure is a model typically used by Chinese companies looking to list overseas to comply with Chinese laws on foreign ownership of domestic companies.

According to a report from state-run China Times, employees confirmed that BGI abandoned overseas listing plans because of foreign investment restrictions.

The company declined to comment to Caixin on why previous attempts to list on overseas exchanges had been scrapped.

The tight capital restrictions appear reasonable given the sensitivity of the work the company does, said genetics professor Han Jianyong of China Agricultural University. BGI is responsible for establishing China’s first national gene bank, and has helped collect and process the genomes of 57,000 individuals and 4,600 plant and animal species.

“It’s important that companies that are delving into key and pioneering areas of public health are not controlled by foreign capital. They are every bit as crucial to national security as energy and transportation firms,” Han said.

But the company mainly relies on reproductive health testing as a source of revenue. Over half of its 1.7 billion yuan revenue last year came from prenatal tests that screen fetuses for hereditary diseases, according to the prospectus.

This percentage of revenue has steadily grown from 2014, when such exams, which cost between 600 to several thousand yuan, accounted for a mere third of total revenue.

The company was one of the first gene-testing companies to receive regulatory approval from China’s food and drug authorities in 2014, when the nation first began to impose rudimentary standards.

However, many risks remain for businesses in the gene testing industry, as the existing technical standards are subject to revision. “The government is still working on policies and standards governing the industry. That’s a large risk for these companies,” Han said.

The company is aware that it is operating in a fast-evolving sector. “There is increasingly intense competition in gene-testing services in China, which means the company is faced with market competition and regulatory risks,” BGI said in its prospectus.