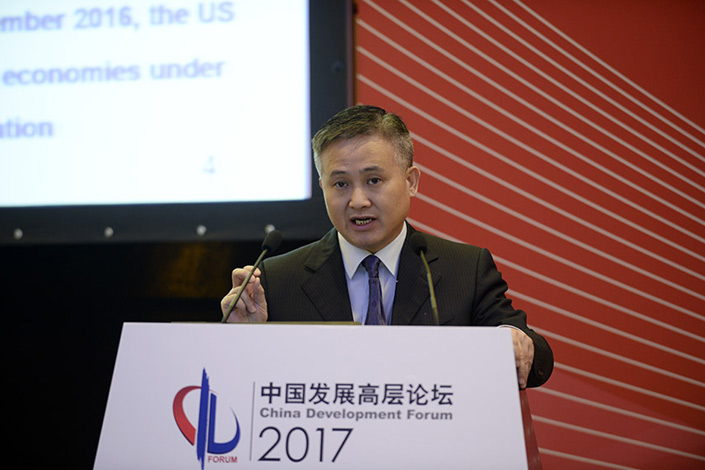 Pan Gongsheng,director of the State Administration of Foreign Exchange, speaks during a China Development Forum event in Beijing on Monday. Pan said the surge in outbound direct investment in 2016 "is a good thing in general," but regulators found some such investments questionable. Photo: Yang Yifan/Caixin

(Beijing) — China’s top foreign-exchange regulator said that the country’s outbound direct investment (ODI) surged rapidly in 2016, but the central government considered some of those investments “irrational” and “abnormal.”

Pan Gongsheng, the head of China’s State Administration of Foreign Exchange, made the comments Monday during the China Development Forum in Beijing.

“It is a good thing in general, which helps achieve mutual benefits while contributing to both the transformation of the Chinese economy and world economic growth,” Pan said.

China is continuing to open its market to the world, pushing ahead with economic cooperation with “One Belt, One Road,” an initiative launched in 2013 that aims to boost trade and cooperation along the ancient Silk Road across Asia and Europe, Pan said.

But Pan also pointed out some investments that regulators consider “irrational” and “abnormal,” such as a domestic steel maker’s acquisition of an overseas food company, and a Chinese restaurant’s purchase of overseas internet gaming companies.

“As you all know, Chinese enterprises have acquired soccer clubs abroad,” said Pan, who is also the deputy governor of China’s central bank. “It would be a good thing if such mergers and acquisitions boosted China’s soccer prowess, but is that the case?”

Pan said many Chinese companies have borrowed large sums of money for foreign acquisitions despite the fact that they have already incurred significant debts at home.

The growth of China’s ODI has dropped in the past three months, which Pan suggested is because the market has “regained some rationality.” In the first two months of this year, China’s overall nonfinancial ODI slumped by 52.8% compared with the same period in 2016, to $13.4 billion, according to data released by the Ministry of Commerce.

Pan encouraged Chinese companies to engage in the global market and to continue to make investments abroad, but he also said mergers and acquisitions were like “thorny roses,” and that “they must proceed with caution.”