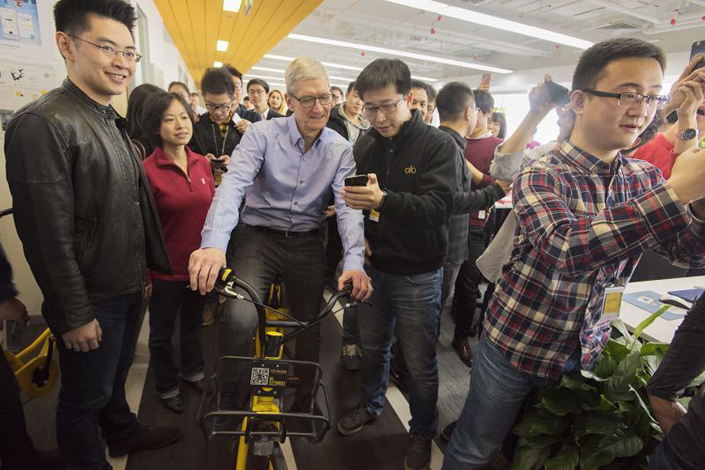 (Beijing) — Smartphone giant Apple Inc. is in China for the long haul, CEO Tim Cook said in an interview on Tuesday, as the company lays down growing roots in a country that has become one of its top global markets in a very short period.

Cook detailed Apple’s many recent investments in China in an interview with Caixin, including the company’s latest announcement of two new research and development centers in the cities of Shanghai and Suzhou, bringing its total in the country to four. He also noted that Apple has a growing retail presence in China through its trademark Apple stores, and that it is partnering on new energy and forestry projects to promote more sustainable development.

“We’re not just someone who’s here to access the market,” Cook told Caixin. “We’ve created almost 5 million jobs in China. I’m not sure there are too many companies, domestic or foreign, who can say that. … There’s deep roots here. I think very highly of the country and the people in it. We’re here to stay.”

Cook made his remarks as Apple’s core iPhones face strong headwinds both globally and especially in China. The company commanded a 9.6% market share in the world’s largest smartphone market last year, making it the market’s fourth-largest player, according to data tracking firm IDC. But that figure was down sharply from its 13.6% share in 2015, when it was the third-largest player.

One of the biggest factors undermining the company has been the rise of a growing number of homegrown Chinese brands like Huawei Technologies Co. Ltd., Oppo Electronics Corp. and Xiaomi Inc., whose phones use the popular Android operating system. By comparison, Apple uses its own proprietary operating system, called iOS.

Reports also emerged earlier this year that Foxconn, one of Apple’s main production partners, might be considering building a factory in the U.S., in response to protectionist rhetoric by U.S. President Donald Trump. Most of Apple’s products are currently made by Foxconn and other production partners in China, where labor costs are generally lower.

To bolster its position in China, the world’s largest smartphone market, Apple has been building up a major community of developers for its smartphones, which dominate the high end of the local market. He said that China now has 1.8 million developers and related workers involved in its ecosystem for iOS apps, selling their products not only to China but also exporting them around the world.

During his visit to Beijing, Cook took time to visit Ofo, a startup specializing in shared bicycle services that has rapidly grown since launching its service last year to include 1,000 employees and a network of millions of loaner bikes. He also commented on Apple’s decision to invest $1 billion last year in Didi Chuxing, the taxi and private-car-services app operator, calling it an exception rather than a general practice for his company.

“We’ve never invested in a developer before, and yet we met Didi, and Didi was so impressive. One, we thought their management was so great, we thought their idea was great,” Cook said. “And we liked the holistic view, they were doing everything from taxi to the more-traditional private-car thing. There was a strategic alignment. They needed some funds to continue to grow. We really want them to be successful and be global.”

At a broader level, Cook also commented on the recent backlash against globalization, which many have cited as a main factor behind Britain’s decision to leave the European Union and the U.S. election of the protectionist-minded Trump.

Cook said it’s important for policymakers to address some of the issues that have led to resentment by some, and that needs to begin by admitting the problem exists. But he added it would be a mistake to try to roll back globalization.

“You want to keep this going because it’s great. But we must fix this,” Cook said. “I do think there are ways to address it. I don’t think it’s an impossible task. I hope the politicians will put their attention on fixing that problem. … I’m optimistic. We must be. There are so many good things in the world. We just have to make sure we focus on the thing to fix.”

This story has been updated to clarify Cook's remarks about the nature of the work performed by 1.8 million people in its iOS app community.