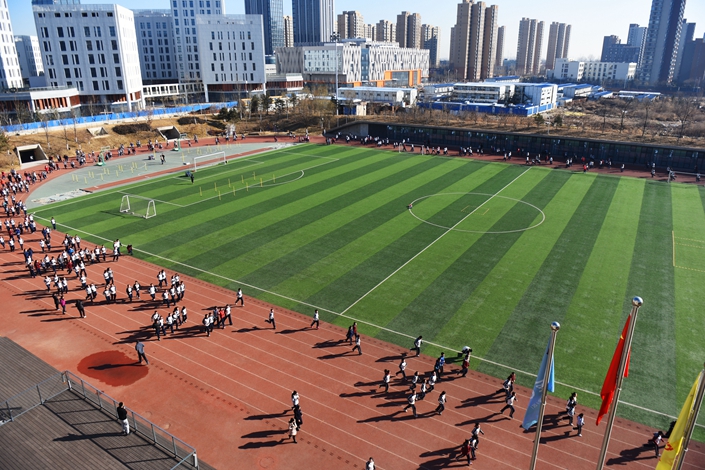 (Beijing) — Beijing will tighten rules covering the partitioning of houses for sale from next month in its latest bid to close loopholes exploited by property owners selling residences near elite schools, amid mounting public uproar over skyrocketing home prices.

The approval of applications for real estate deeds by owners rebuilding or renovating single-story houses or seeking to change to multiple ownership will require site measurements recognized by the government from April 10, the Beijing Municipal Commission of Housing and Urban-Rural Development announced Monday.

Applications will be vetted strictly according to original floor plans, and corridors will be labeled clearly in official property registration documents to prevent them from being sold independently, according to the new rules.

The policy will discourage owners of residences that meet the enrollment criteria of schools dubbed as “xuequ fang”, or “school-district houses” from partitioning one property into small, unlivable cabins and selling them to different buyers, said Chen Zhi, secretary general of the Beijing Property Association.

A room of two square meters in a courtyard house in Financial Street in the city’s west was sold for 260,000 yuan ($38,000) last year and a three-square-meter-corridor in Qianmen to the south of Tiananmen Square was priced at 900,000 yuan, the official Xinhua News Agency reported previously.

The housing commission’s announcement came after education authorities in Beijing over the weekend outlawed ownership of corridors as an acceptable condition for admission to nearby schools.

Public schools in Beijing only admit children who live locally, with preference given to those whose Hukou — the residence registration in China that grants access to government services — is in the area and whose family owns a property nearby.

As school-age children have increasingly outnumbered seats available at institutions due to the city’s rapid population growth, prices of school-district houses near top schools, most of them public, have surged to levels beyond the reach of many people.

Such properties are clustered in downtown areas where government agencies and large state-owned companies are located, and many of them are old, single-story buildings such as courtyard houses.

Owners and real estate agents have seen sales of these houses as a chance to make a fortune, going to such extremes as partitioning one residence into several small homes and paying extra money to the government for separate property deeds for cramped corridors to maximize profits.

The high cost of school-district houses has sparked public outrage in Beijing, where home prices are already among the most expensive in the country.

In one post that went viral on China’s social media platforms recently, a man who identified himself as a Ph.D.-holder from the prestigious Peking University wrote bitterly that he was forced to leave Beijing with his family because he could not afford a home near a good primary school for his son.

“I was educated not to worship money and imbued with the ideal that knowledge is fortune… But at the end of the day, reality has taught me that knowledge is no fortune, because it cannot be used as a down-payment or collateral when I am trying to buy a house,” he said.

The post triggered an outpouring of empathy from Chinese internet users, with one commentator asking: “If graduates from Peking and Tsinghua universities cannot afford a home in Beijing, why bother to buy a school-area house?”

The restrictions on the supply of school-district houses came as Beijing stepped up efforts to try to cool the city’s overheated property market.

Prices of new homes in Beijing soared 22.1% in February from a year ago, still a rapid pace although it slowed moderately from a gain of 25.9% in December, according to the National Bureau of Statistics. The agency did not offer any details of actual average home prices in the city.