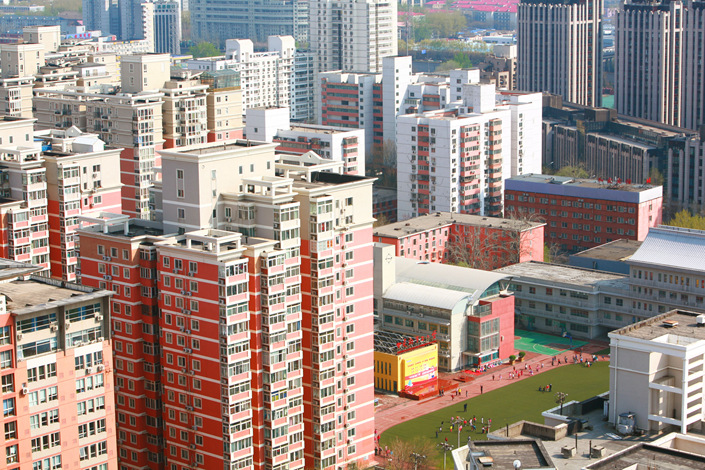 The Wudaokou area of Beijing's Haidian district is one part of the capital that has seen skyrocketing property prices as parents try to buy homes in neighborhoods that meet the residency requirements of the best schools. Photo: Visual China

On average, a 90-square-meter two-bedroom apartment in the Chinese capital costs about 8 million yuan ($1.16 million). But tiny basement apartments without ventilation in some neighborhoods close to popular schools near Beijing’s Financial Street cost that much. In another area near the old city wall in Deshengmen, where several top schools are located, that amount was barely enough to buy half that floor space.

Property bubbles emerged in areas around elite schools after the local government put more pressure on public schools to admit only those children who live locally. The trend is set to accelerate with the baby boom expected now that China has eliminated its one-child policy — many parents believe that choosing the right primary school for their child is vital to getting them into a good high school followed by a prestigious university.

Most top primary and middle schools in Beijing were concentrated in three districts: Xicheng, Haidian and Dongcheng. Property in some neighborhoods near the top schools in these areas is so expensive that the media have even coined a name for them: “xuequ fang,” or school-district houses.

In the Yuzhong Dongli neighborhood in Xicheng, the price of a home near an elite primary school jumped from 130,000 to 150,000 yuan per square meter from February to March, a Caixin investigation found. That meant it was 40% more expensive than properties that didn’t fit the enrollment criteria of top schools. Homeowners in the area said they were paying a premium to send their children to Yuzhong Primary School, which will allow them to enter Beijing Sanfan Middle School, one of the top schools in the capital. An apartment just one block away was sold for 90,000 yuan per square meter in February because it wasn’t in the top school’s area, a local real estate agent said.

The issue became a trending topic on Chinese social media recently, after a man who identified himself as a Ph.D.-holder from Peking University wrote bitterly about the phenomenon.

The man, a former researcher at the Chinese Academy of Sciences, said he had left Beijing with his family and moved to his hometown, Nanjing, because he couldn’t afford a home near a good school.

“If graduates from Peking and Tsinghua universities cannot afford a home in Beijing, why bother to buy a school-area house?” one commentator asked.

Demand for properties near schools have shot up in recent years as the number of school-age students far outnumbered the seats available at top schools due to the explosive growth in the city’s population.

A government crackdown on attempts to gain backdoor access to elite schools has made school-area houses more sought-after. City authorities have stopped government agencies and state-owned enterprises from signing sponsorship deals with elite schools in return for a fixed enrollment quota for their employees’ children. The move was prompted by growing public discontent over privileges reserved for state employees.

Education authorities have also stopped granting extra credit for students who have excelled in certain extracurricular activities such as winning a medal at the International Mathematical Olympiad.

That basically leaves parents vying for a spot in a top school with one solution: buying a home near the school, a real estate agent with Lianjia said.

In March, the city’s housing authority ordered real estate agencies to stop advertising homes that cost over 150,000 yuan per square meter due to concern over fueling a housing bubble, the Beijing Morning Post reported.