By Hou Wen and Li Sijia 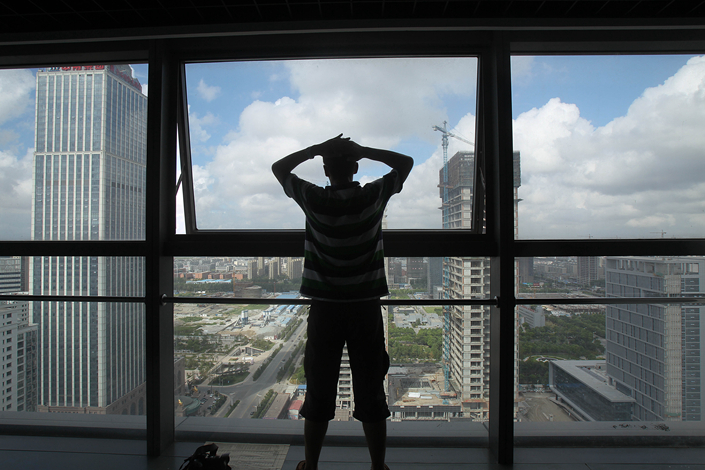 Last year was a record-breaker for China’s closely watched residential real estate market. Home sales exceeded 11 trillion yuan (US$1.6 trillion) nationwide for the first time, according to government statistics, and prices in hot markets such as Shenzhen experienced year-on-year growth of up to 60%.

Driving the latest slowdown is the industry’s “cat” — real estate-savvy government regulators who for years have been playing cat-and-mouse with the nation’s property developers.

Fearing social and financial instability tied to rising property prices, the government last fall launched an unprecedented series of regulations designed to dampen speculative home buying and better control the market. Since then, developers have been scrambling like mice.

The first round of policies in October restricted home buying and mortgage access, and set new leverage limits in 22 cities where real estate markets are hot. A few weeks later, regulators took steps to slow the flow of investment funds into real estate.

In November, the government raised down-payment requirements and cut allowable parameters for mortgage interest rate discounts to no more than 10% in select hot-spot cities.

The rules had no immediate effect on prices, in part because buyer demand has remained strong and local governments have sharply curtailed land transfers for new construction in strong-market cities. The land decisions prevented developers from adding inventory, which in turn kept finished home prices high.

Developers have thus found themselves squeezed between regulations and new-building bottlenecks. The squeeze is expected to continue until at least next fall, as the government has shown no signs that it plans to relax recently enacted controls, according to high-level real estate company executives interviewed by Caixin.

Property developer Future Land Development Holdings Vice President Ouyang Jie, for example, said he thinks maintaining social and financial stability will be a priority for regulators this year in the runup to President Xi Jinping’s second term in office, which begins in 2018.

Developers are adjusting to the regulatory environment by focusing on new projects specifically designed to yield hefty profits, such as long-term property leasing and selling apartments inside commercial developments. Moreover, market forecasters say the nation’s ongoing urbanization program will keep property market turnover high over the next three to five years.

Curbing speculative buying and rule-bending marketing practices were among the goals behind regulatory action in recent months.

For example, the latest rules tightened controls on businesses that got around residential market limits by selling living units inside buildings licensed for commercial use.

Some homebuyers have thus been sold hotel-style units in commercial buildings. These units that cost less than genuine residential units, but they lack key amenities.

Prices are lower in part because these units come with property-ownership rights that are valid for only 40 to 50 years, compared with the standard 70 years allowed by the government for residential property. Moreover, utilities such as water and electricity are billed at a higher rate in commercial properties.

On Jan. 8, the Shanghai Municipal Construction Committee issued a notice vowing to “clean up” commercial-residential projects.

A follow-up document seen by Caixin and released Feb. 17 detailed plans for addressing these projects in Shanghai’s Minhang district. The plan called for “rectification work” at these sites, including building blueprint and interior accommodation changes.

Beijing city officials have also taken aim at commercial-residential projects, which in 2016 accounted for 30% of the city’s housing sales. On Jan. 14, for example, Deputy Mayor Chen Gang announced that no more land would be made available for new commercial-residential building projects. Chen also pledged to control future growth of this market niche.

Although an executive with a Fujian-based developer with commercial-residential projects in Beijing told Caixin the company had yet to receive any government rectification notices, many developers in the city have been keen to offload living units in nonresidential buildings. Motivating the developers is a fear that regulators may crack down even harder in the future.

From Feb. 1 to 19, the Fujian executive’s company sold 360 commercial-residential apartments in Beijing’s Daxing district at an average price of 54,000 yuan per square meter, or more than $500,000 for a small flat.

Ten of 23 newly built developments expected to hit the market in March were commercial-residential projects, according to Beijing-based Yahao Real Estate.

“It will be a huge blow to developers once rectification of these projects begins,” Guo told Caixin. “This may be the last hurrah for commercial-turned-residential products.”

The National Land Planning Outline for 2016-2030, released Feb. 4 by the State Council, calls for more efficient use of state-owned land and reducing the amount of land available for development.

In step with that directive, Beijing authorities announced Feb. 21 that only 260 hectares (642.5 acres) of state-owned land will be allocated for residential construction projects in 2017. That’s the lowest allocation in five years and represents a 70% cut from 2016.

Land constraints mean home prices in the capital city will likely rise, even though real estate executives told Caixin that regulators would rather see price stability.

Much of the land given a green light for urban development this year will be set aside for a separate goal: The government wants about 1,000 towns nationwide to be redeveloped in ways that support local businesses tied to the tourism, cultural heritage, logistics and manufacturing sectors.

Upgrading businesses in these targeted towns fits the government’s urbanization push. New developments, the government hopes, will encourage farmers to move off the land and into towns with new business and employment opportunities.

Building projects in these 1,000 communities generally take longer to complete than traditional residential properties, according to China Fortune Land Development President Meng Jing, whose company has been developing the Gu’an New Industry City in Hebei province since 2002. But that hasn’t stopped real estate companies from competing for these projects, which are attached to favorable government policies and land access.

Indeed, developers have been willing to adjust and pursue any new endeavor that’s profitable, such as long-term apartment leasing.

Real estate behemoth Vanke, for example, since 2015 has been aggressively marketing a flat leasing brand called Park Apartments. Rival developers Longfor, Gemdale and Sino Ocean are among those following suit.

Even smartphone manufacturer Xiaomi Inc. is in the flat-leasing business through its 3-year-old brand You+ Apartments.

Developers are also involved in the effort to increase supplies of housing for urban blue-collar workers.

At the same time, banks have been tightening home mortgage and property development loan availability. According to market watchers, banks are likely to increase interest rates this year in ways that reduce funds for real estate.

In a recent report, Haitong Securities Chief Macroeconomic Analyst Jiang Chao said that before regulators unleashed their latest rules, the interest rate on 10-year government bonds was 3.1% and the average mortgage rate was around 4.52%.

As of March 3, the bond rate had risen to 4.2%, while as of January the average mortgage rate had crept up to 4.46%, according to property market data provider Rong360.