Beijing Cracks Down on ‘Fake Divorces’ Spurred by Property-Buying Frenzy 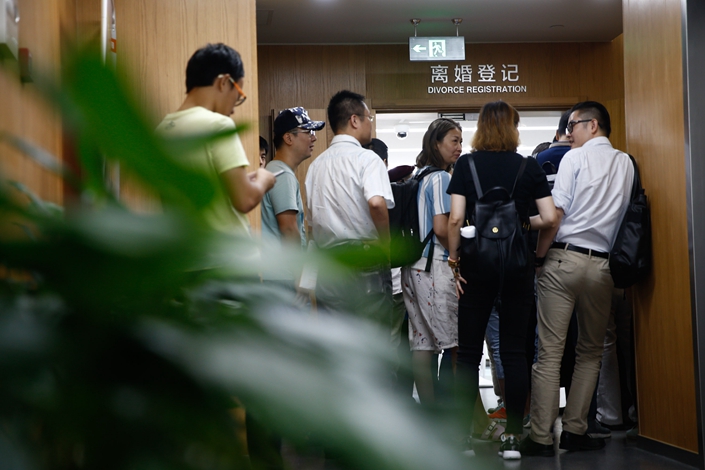 People visit their local civil affairs bureau to register for divorce, on Aug. 30, 2016. Starting Friday, couples who already own a house in Beijing and have been divorced for less than a year will be regarded as second-time home buyers. Photo: Visual China

(Beijing) — The city government in Beijing has further tightened home purchasing rules to clamp down on divorce filings inspired by the city’s overheated property market.

Starting Friday, couples who already own a house in the city and have been divorced for less than a year will be regarded as second-time home buyers, four central and municipal government agencies said in a joint statement Friday.

Because the government requires homeowners to pay more in down payments to buy additional properties, couples have been getting divorced, while still living together, so that one partner can be treated as an independent buyer.

“Recently, the number of families who file for divorce to enjoy benefits for first-time homebuyers has increased,” said the government departments, which include the central bank and the banking regulator’s Beijing office. “This practice has not only had an impact on the effectiveness of regulation, but also could result in property disputes and lower the ability to pay off mortgages.”

The move comes as the city struggles to contain its red-hot property market. In February, new home prices in Beijing rose by 22.1%year-on-year, according to the National Bureau of Statistics. The average selling price per square meter of second-hand homes was 67,600 yuan ($9,800) in the second week of March, a 2% increase from the previous week, according to Beijing Homelink Real Estate Agency Co. Ltd.

While some netizens applauded the government’s efforts to clamp down on dishonest divorces, others expressed concern saying the policy will have a negative impact on those who genuinely want to divorce and buy a home afterwards.

“Why can’t we learn from the immigration bureaus in Western countries to determine if it’s a fake divorce,” said a Weibo user. The government could “find out if the couple is still living together or if they still keep in close contact” rather than “adopting this simplistic and sweeping approach.”

Soaring home prices have prompted the Beijing government to introduce a fresh round of restrictive measures to curb a potential housing bubble. The latest controls include raising the threshold for down payments and suspending mortgages with a payback period of over 25 years. The local housing and tax departments said on Wednesday that people without a Beijing hukou, or household registration document, must pay income tax for 60 months in a row before they can purchase a home in the city.

Banks are also tightening lending policies. As of Thursday, 11 out of 16 banks in Beijing have reduced discounts offered on mortgage rates to 10% off the official benchmark rate for homebuyers, down from 15% previously, according to people with knowledge of the matter.