After the Love is Gone, Hollywood-China Tie-Ups Come Unhinged 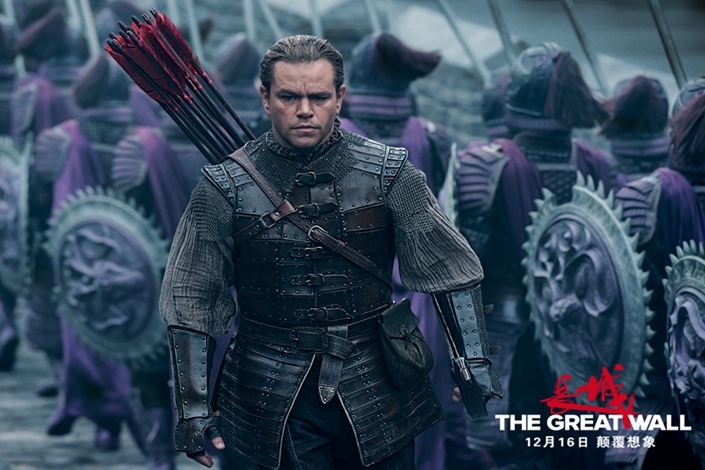 A poster promotes the movie "The Great Wall," the biggest-ever China-Hollywood co-production. The film was a big box-office disappointment — one reason that such collaborations have hit a rough patch.

(Beijing) — The lights are fading from the China-Hollywood love affair.

A five-year investment frenzy that saw billions of dollars flow between China and Los Angeles has hit a sudden rough patch, with the derailment of three major cross-border tie-ups over the last month. Two of those are seeing Chinese investors get cold feet over billion-dollar Hollywood-production tie-ups. The third, somewhat symbolically, is seeing the unraveling of a China-based animation joint venture involving DreamWorks Animation, which kicked off the love affair five years ago.

Analysts point out that a number of factors are at play in this latest chapter of a Hollywood-China love story that is by no means on the brink of collapse. Two of the dying deals appear to be victims of recent foreign currency controls by Beijing, aimed at slowing a flood of outbound investment to support the Chinese yuan at home and also slow down a buying wave that some have called irrational.

At the same time, the Chinese buyers in two cases are also reportedly having second thoughts about more practical issues like overpayment for assets. Cross-cultural difficulties are also a concern in the new wave of tie-ups, which have made unusual bedfellows of seasoned western movie-makers and Chinese peers who just three decades ago were still pumping out propaganda films extolling the virtues of socialism.

Also sending shivers through the relationship is an unpredictable Chinese box office, which posted years of strong double-digit growth before suddenly cooling sharply last year amid allegations of manipulation.

“The Chinese government is simply reasserting some level of control over an outbound investment process that has become ‘irrationally exuberant,’” said Brock Silvers, managing director at Kaiyuan Capital. “I expect 2017 will be a banner year for Chinese outbound investment, but China wants those deals to be more focused, with more limited risk profiles.”

The first major signs of trouble in the China-Hollywood relationship emerged last month, when a previously announced agreement for China’s Wanda Group to buy Dick Clark Productions for nearly $1 billion was reportedly on life support. Neither side has commented publicly on the situation, including any official word of scrapping of a plan that was first announced just three months earlier.

But sources citing people familiar with the situation have said the Chinese buyer was having second thoughts about the deal after weak performance by one of its previous mega-purchases, Hollywood studio Legendary Entertainment, which Wanda bought early last year for a hefty $3.5 billion.

Just weeks after the Wanda-Dick Clark deal’s reported sputtering, another agreement that saw two Chinese investors say they would pump $1 billion into Hollywood studio Paramount Pictures Corp. also started to unravel. In that instance, reports citing unnamed industry sources said Shanghai Film Group Corp. and Huahua Media were balking at their earlier agreement to co-finance all of Paramount’s films over the next three years over concerns about a power struggle in the top echelons of the studio’s management.

Neither side has officially confirmed a scrapping of that deal, which was just announced in January.

As those two deals were struggling, other media reports emerged earlier this month saying a restructuring was occurring at Shanghai Oriental DreamWorks Film & Television Technology Co. Ltd., the U.S.-China animation joint venture whose formation in 2012 kicked off the steady stream of cross-border tie-ups over the past five years. That overhaul reportedly included a potential sale of the 45% of the venture held by DreamWorks Animation’s parent Comcast Corp.

Beijing’s Role Behind the Scenes

“Based on other reports and analysis, it does appear that these two deals were affected by foreign currency controls,” said Tiger Hou, an analyst at EntGroup, referring to Beijing’s recent efforts to slow a steady outflow of money from China into foreign markets.

A cooling Chinese box office, and the recent disappointing performance of the cross-border big-budget film “The Great Wall,” starring Matt Damon may have also been factors.

After strong gains for much of the last decade, including staggering growth of nearly 50% in 2015, China’s box office suddenly hit the skids last year with only 4% growth. The slowdown was attributed to a number of factors, including a big reduction in ticket sale inflation by production companies eager to showcase their films’ successes in previous years. As that wave subsided, a new wave of under-reported ticket sales saw 326 companies fined earlier this month, highlighting the manipulation that takes place behind the scenes at China’s box office.

At the same time, “The Great Wall,” the biggest-ever Hollywood-China co-production, starring Matt Damon and backed by Wanda’s Legendary Entertainment, has been a major disappointment. The sci-fi historical film, which cost $150 million to make, has earned just $330 million worldwide since its release in December, far less than the $450 million analysts say it needs to break even.

Similarly disappointing results for Oriental DreamWorks may have been a factor in parent Comcast’s recent decision to potentially sell its stake in the venture. The $330 million joint venture has been involved in only four feature productions since its inception. And its only major project, “Kung Fu Panda 3,” generated just $154 million at the China box office, about half of what was expected.

Silvers said that Hollywood may be somewhat to blame for the recent pull-back in the Wanda and Paramount deals for creating too much exuberance around the potential of trans-Pacific purchases.

“Wanda's $1 billion Dick Clark deal was widely seen as a significant overpayment wholly outside of Wanda's business model or expertise. Paramount’s intended Chinese co-financing is being reconsidered in light of the significant losses incurred by Matt Damon’s ‘The Great Wall,’” he said. “Unsurprisingly, (China’s foreign exchange regulator) is now declining to support this type of risky deal-making.”

Observers said the derailment of deals represents a setback in the relationship, but added that the love affair is by no means over and should continue to thrive in the years ahead.

“From a long-term perspective, the China-U.S. cooperation in movies is standing on a solid foundation,” said EntGroup’s Hou. “The short-term difficulties won’t affect cross-border cooperation between companies in both countries. The number of co-productions should keep rising.”