Audi Backs Off Plan for Second Joint Venture in China 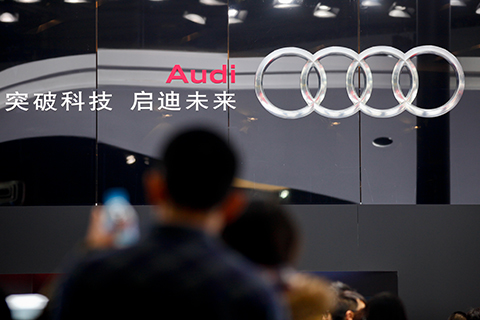 The decisions came after Audi met Tuesday with dealers and its current joint venture partner, FAW Group, with which the current dealers are affiliated. The talks were to resolve a dispute over Audi’s plan to make and sell cars with SAIC.

The dealers attending the meeting declined to comment, citing confidentiality agreements. Audi disclosed to Caixin that it is discussing with dealers a proposal that Audi drafted with FAW.

In November Audi revealed a plan to set up a venture with SAIC in addition to its 22-year-old FAW joint venture to expand its production and sales network in China while reducing reliance on FAW. But the plan received vehement opposition from Audi’s FAW dealers because a new SAIC-affiliated dealer network might dent their long-term prospects with sales already in a sharp decline.

Despite its market-leading position, Audi has been losing sales as Mercedes-Benz and BMW play catch-up and new entrants such as General Motors Co.'s Cadillac roar into the luxury market. In the first two months of 2017, Audi's sales in China declined 24% while sales of Mercedes and BMW rose.

In February, dealers met in the resort town of Sanya, where they issued a statement opposing Audi’s plan to establish a second joint venture until the carmaker could exceed 1 million units in domestic sales. They also asked for payments to offset losses over the past three years and guarantee a profit margin of at least 3%. Audi and FAW haven’t agreed to all of the dealers’ demands.

According to sources at FAW, Audi Chairman and Chief Executive Officer Rupert Stadler, who has been actively pushing the SAIC plan, flew to Changchun last week to meet with FAW Chairman Xu Ping. Details of their meeting were not disclosed.

With Stadler’s role in the emissions-cheating scandal involving Audi’s parent company Volkswagen Group still not clear, FAW and SAIC are cautious about their next steps, according to people close to SAIC.

Earlier this month, German authorities raided Audi’s headquarters and two of its largest plants, raising questions whether Stadler was involved with the Volkswagen scandal.

Any changes in Audi’s top management could cast a cloud on the prospect of Audi-SAIC plan, the source said.