Authorities Join Forces in Bid to Save Huishan Dairy 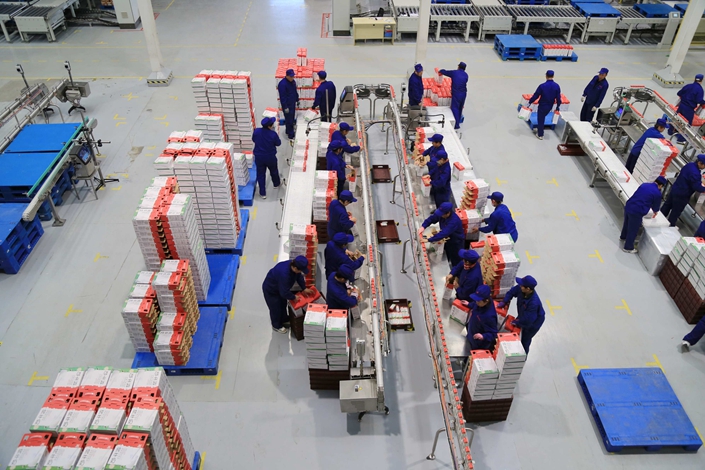 Huishan Dairy employees work in the company's production workshop in Shenyang, Liaoning province, in April 2015. The provincial and city governments are working with Huishan to restructure its debts. Photo: CNS

(Beijing) — China Huishan Dairy Holdings Co., one of the country’s largest dairy producers, is trying to restructure its business with the help of provincial and city government officials in an effort to pay back its extensive debts.

Huishan Dairy convened its second meeting with eight major creditors on Monday, according to a statement released late Tuesday night by Hongling Capital, a peer-to-peer lending website that channeled 50 million yuan ($7.3 million) into the dairy firm in early February.

At the meeting, Yang Kai, Huishan’s chairman, said that the current output and quality of Huishan Dairy’s products are at a normal level “without being affected by the blow dealt by the capital market,” and the company is reshaping its business with the aim of attracting “top tier” strategic domestic investors, the statement said.

The liquidity crisis has drawn attention from the governments of both Liaoning province and its capital, Shenyang, where the dairy company is based. The Hongling Capital statement said the governments together have set up five emergency response groups of officials to cope with the restructuring of Huishan Dairy.

A creditor commission has been set up and held its first meeting on Tuesday afternoon, where local government officials called upon creditors not to call in loans and not to file lawsuits — a move that aims to pave the way for the company to attract investors and “maintain social and financial stability.”

Hongling Capital said it plans to meet Chen Lina, Huishan Dairy’s vice president, on Wednesday morning. Hongling said Chen has taken over the responsibility of managing the company’s financial affairs from Ge Kun, whom Huishan has been unable to contact since last week.

Bankers told Caixin that Huishan Dairy currently owes about 12 billion to 13 billion yuan to as many as 70 creditors. The largest creditor is the Bank of China, which granted a 3.3 billion yuan credit line to Huishan, followed by Jilin Jiutai Rural Commercial Bank.

Jiutai Bank said in a statement on Tuesday that the total outstanding loans it granted to Huishan Dairy are 1.35 billion yuan, and there is no default on any interest due. The bank also said it has not provided a provision for credit impairment.

On Thursday, the day before Huishan Dairy’s Hong Kong-listed shares dropped a record 85%, Yang Kai said that his company had a “broken capital chain,” and he will seek to raise 15 billion yuan to solve the liquidity crisis by selling company equities to new strategic investors.