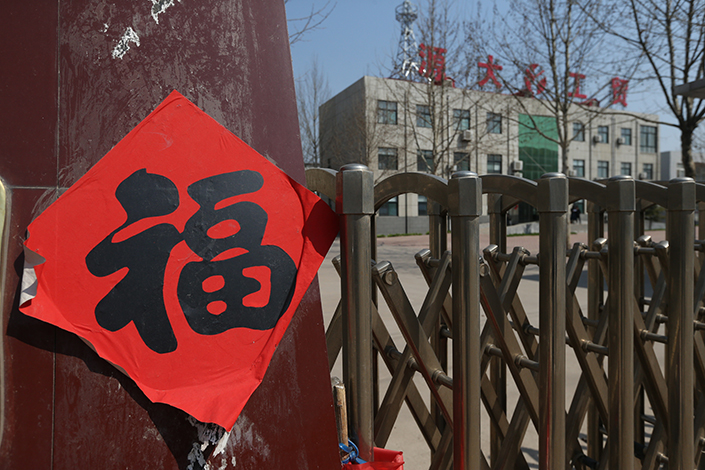 The now-closed Shandong Yuan Da Industry and Trade Co. Ltd. factory in Liaocheng, Shandong province, is where Yu Huan fatally stabbed a debt collector who had exposed himself to Yu's mother. The debt collector was part of a group confining the mother and son in the reception room. A provincial court has ordered Yu's life sentence to be reviewed. Photo: IC

China is reviewing the life sentence given to a young man who killed a debt collector who had humiliated his mother, in a case that has sparked public outrage and highlighted the desperation of small businesses caught up in the brutal world of predatory lending.

There is no question that Yu Huan, 22, stabbed and killed the debt collector, who had come with a dozen associates last year to demand additional interest payments from the son and mother. The altercation broke out at the family automotive brake-pad factory located in Liaocheng, about 500 km south of Beijing.

But an investigative article by China’s Southern Weekly published last week that quoted witnesses saying the debt collector had exposed himself to the mother during the shakedown sparked a huge online debate. That article led the regional court in Shandong province, which administers Liaocheng, to order a review of the sentence as well as to tell prosecutors to check out whether police had acted properly when called to the scene shortly before the slaying.

The severe sentence hit a nerve in China. Many poured out their emotions on the Internet, saying police failed to intervene when the mother and son were being browbeaten by the debt collectors.

It also has sparked a cultural debate over what a good Chinese son should do if his mother is humiliated, and over whether courts should weigh such circumstances when deciding punishment.

“Any normal person will do the same when their mothers are treated this way,” one person wrote on a microblog.

A fellow microblogger said: “Such humiliation a mother suffers is worse than that a country suffers (in defeat in war). If someone could not protect his or her mother, there is no point to talk about defending one's country.”

Another said, “There is no doubt the youth acted in self-defense and he might have taken it a bit too far, but a life sentence is just too harsh.”

The Dark World of Loan-Sharking

China has tried to clamp down on predatory lending.

Two years ago, the nation’s top court said lenders charging more than 24% annually in interest are not protected by the court system. In addition, the Supreme People’s Court ruled it illegal for lenders to charge annual interest rates above 36%.

It was this world that the brake-pad factory family found themselves trapped in.

The family’s nightmare began in 2014, when the mother, Su Yinxia, 48, reached out to an underground moneylending business after the brake-pad factory ran into trouble in 2014, Southern Weekly reported.

By April of 2016, Su had paid back 1.84 million yuan in cash and given the lender a 140-square-meter house worth about 700,000 yuan, Southern Weekly reported, quoting Yu Xiurong, Su’s sister-in-law.

That’s when the family allegedly began being harassed.

On April 13, when Su went to pick up her belongings at the house she had turned over, the lender’s associates pushed her head into an unflushed toilet, the sister-in-law said.

Su called police and the city government hotline four times after the incident, the sister-in-life continued. Police officers came to collect statements at the factory, and when Su tried to leave with the officers, she was stopped by the lender. The police simply left, the sister-in-law said.

The next day, 11 debt collectors hired by the lender confined Su and her son in the company’s reception room from around 8 p.m., according to the sister-in-law.

One employee told the Southern Weekly that one of the debt collectors, Du Zhihao, hurled foul words at Su and her son before he grabbed Yu Huan’s shoes and rubbed them against Su’s face—a sign of total disrespect.

The abuse didn’t stop there, according to the two employees interviewed by Caixin. Du later dropped his pants and exposed himself to Su.

Su’s brother called the police, and three officers arrived at about 10:13 p.m., but they left a few minutes later, the sister-in-law told the weekly.

When Yu Huan tried to force his way out as the police left, the debt collectors tried to stop him, and a fight erupted. Yu Huan grabbed a fruit knife and stabbed four men, including Du, the only one who was gravely wounded.

Yu Huan was given a life sentence by the Liaocheng court for causing grave bodily harm.

Chen Guangzhong, a law professor at China University of Political Science and Law, said the new focus on the case is offering a significant opportunity for the courts, police and ordinary citizens to stop and think about painful issues often overlooked.

“Investigators should not just focus on the controversial verdict, but also on several broader issues, including alleged loan sharks and possible negligence by police in investigations,” Chen said.