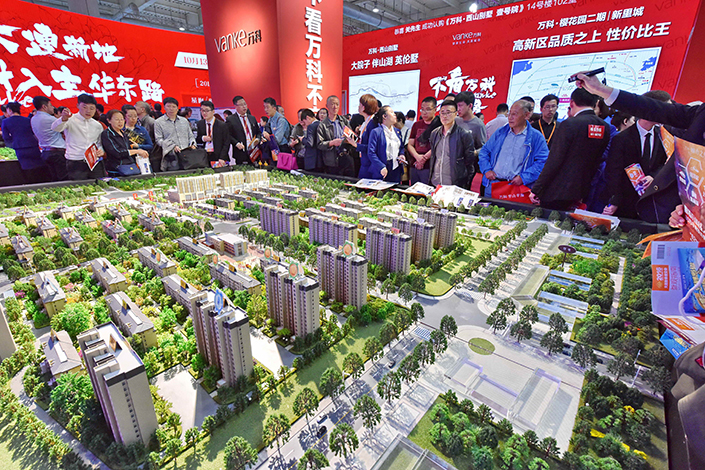 Visitors look at a real-estate model at the Dalian Autumn Housing Fair on Oct. 14, 2016. Some people are no longer able to afford to buy a home after a recent policy change in Beijing. Photo: IC

(Beijing) -- Chen Yanyan, a white-collar worker in Beijing, sold the home she and her husband had lived in for six years in November and used the proceeds to pay the deposit for a larger, more comfortable apartment.

The couple was on the verge of finalizing the deal when new home purchasing restrictions rolled out by the city government on March 17, threw their plan into disarray.

The new rule aimed to curb speculation in the property market by increasing down payment requirements for “second-time home buyers” to at least 60% from an earlier 50%.

But the new rule has trapped homebuyers like Chen, who had already sold their first home before going for a new purchase. Under the new rule, if anyone has taken a loan to buy their first home, their next purchase is automatically considered an additional, second home, even though they have already sold the first one and repaid all loans connected to it. The city government hasn’t offered any explanation for this problematic definition so far.

“I couldn’t help but cry when I received a phone call from my real estate agent on March 17, telling me that I must now pay an additional one million yuan in down payment to close the deal,” she said. Her down payment amount had gone up to 70% from an earlier 50%, given the size of the house.

Chen and her husband had borrowed from relatives, on top of the proceeds from the sale of their first home, to cover the down payment for their new purchase.

“Now we’re more than one million yuan short. Who else can we turn to in order to borrow more?” she said.

Even worse, the money they have was no longer enough to buy back their old house, as home prices in Beijing have surged since the Chinese Lunar New year in late January.

Instead, they now pay rent to the owner of their old home, while pondering over what to do next.

After signing a purchase contract, homebuyers in China are required to notify the local housing authority about the deal via an online filing system. Chen was just days away from submitting her documents when the rules changed, upending the deal.

At least 10,000 homebuyers in Beijing are trapped in a similar situation known as “half-way housing deals,” according to an estimate by the research unit affiliated with Homelink Real Estate Agency Co.

Regulators in many other cities had exempted homebuyers who have already signed purchasing contracts, but hadn’t filed their paper work with authorities, from the new rules. But Beijing has adopted a harsher stance.

A total of 35,000 homes were sold in Beijing between early February and March 17 and about 30% of those transactions are deemed “half-way deals,” The Beijing Times newspaper reported citing statistics from Maitian.cn, another real estate agency in Beijing.

Another resident from Wang Jing, a suburb in Beijing’s North East, said she has signed a contract to sell her small home in January and was planning to use the proceeds as down payment for a 170 square-meter apartment worth 7.5 million yuan. She had already signed a deal to purchase the new home on the same month.

But the white-collar worker, who requested anonymity, said she hadn’t submitted the paperwork to the local housing authority, which means she has to pay 80% in down payment instead of the earlier 40% before the policy change. They came to an additional 3 million yuan and she said her family was “at its wits end trying to raise the extra money.”

“I feel like I lost my home overnight, something I never expected,” she said.

Another home buyer trapped in a similar situation told Caixin that she and her husband have been forced to raise another one million yuan to buy a house of 70-square-meter apartment in Xisanqi area in Beijing’s northwest after the rules changed.

"We might be able to borrow another 200,000 yuan and we are trying to negotiate a deal that allows us to pay the rest in installments," she said.

“Otherwise, we might have to get together with other homebuyers and take the government to court,” she said.