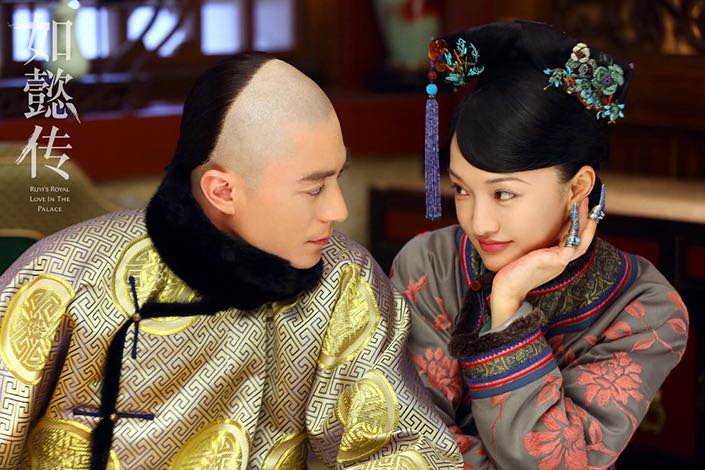 Huo Jianhua (left) and Zhou Xun star in the upcoming historical drama "Ruyi’s Royal Love in the Palace." The actors received a combined 150 million yuan — one example of how high salaries are pushing up the cost of producing a TV series. Photo: IC

Eternal Love, the TV adaptation of Chinese author Tang Qi’s fantasy romance novel To The Sky Kingdom, premiered in late January. By the time its 58th and final episode was released on March 1, it had received over 30 billion views on online video platforms alone.

Viewer numbers are not the only staggering figures Eternal Love has generated. Each episode cost nearly 6 million yuan ($871,000) to produce, which adds up to about 300 million yuan for the entire series, people involved in the production of Eternal Love told Caixin.

Eternal Love aired on Dragon TV and Zhejiang TV, as well as six online platforms. A single episode sold to multiple broadcasters can earn the producers a total of 7 million yuan in broadcasting rights revenue, the people said.

Large-scale productions like Eternal Love are increasingly common in the world of Chinese TV dramas, where producers and broadcasters will spare no expense in their pursuit of viewer numbers. But this has put TV stations and video-streaming platforms under increasing pressure to make sure their investments pay off.

Often, the cost of producing a series is pushed up by massive TV-star paychecks.

In late 2016, it was revealed that lead actors Huo Jianhua and Zhou Xun in the upcoming historical drama Ruyi’s Royal Love in the Palace were being paid a total of more than 150 million yuan to appear in the series. Ruyi producer Huang Lan publicly defended the actors’ “astronomical” pay, saying it was “value for the money.”

For some dramas that rely heavily on famous actors to draw viewers, “TV stars’ paychecks can account for 76% of the cost of production,” Shanghai Media Group executive Wang Leiqing said at an industry conference earlier this year.

More and more producers are relying on big names to boost viewership, thanks in part to video-streaming platforms’ paid-membership strategy.

If video-streaming platforms didn’t charge users to watch content, they “wouldn’t need big names to carry the show, and the scripts wouldn’t need to pander to fans. Most of the time, it’s when the series is almost over or even two weeks after the last episode is released that it reaches peak viewership,” Gong said.

But with paid content, viewers are charged only for watching an episode for the first few days or weeks after it goes online, so video streaming platforms want high viewership from the moment each episode goes online, and look for storylines and actors who already have fans, Gong said.

As a result, TV stations and video-streaming platforms are scrambling to find ways to ensure that the large sums they are spending pay off. Youku Tudou, the streaming platform owned by tech giant Alibaba Group Holding Ltd., placed nearly 300,000 advertisements for Eternal Love in 140 cities across China. The company even paid to deck a Beijing subway station with peach blossoms, a reference to the drama’s alternative title, Ten Miles of Peach Blossoms.

Tencent Video bought online broadcasting rights to Ruyi’s Royal Love in the Palace for 9 million yuan per episode, and Zhejiang TV and Shanghai Dragon Television are paying close to 3 million yuan per episode, people involved with the deals told Caixin. At least 90 episodes are due to air later this year, so Ruyi could bring its production company, New Classics Media, more than 1 billion yuan in broadcast rights revenue alone.

But increasing their revenue from selling broadcast rights is only half of the picture for China’s TV producers.

Video platforms are increasingly choosing to produce their own dramas, putting downward pressure on production companies’ profits, Limmon Pictures President Su Xiao said. Video platforms used to focus solely on buying broadcast rights, but now many companies are moving upstream, buying intellectual property from screenwriters and negotiating directly with actors. Some aspects of production are outsourced to traditional studios, but these studios bring in less revenue than they would previously have as the main producers.

“This is the model appearing elsewhere in the world, and China is moving toward this too,” Su said, referring to companies like Netflix Inc. and Amazon.com Inc., which began producing original programs a few years ago.

The average gross profit margin of TV and film production firms in China has fallen from more than 40% two years ago to 30%, a recent Southwest Securities Co. Ltd. report showed.

But according to Wang Xiaohui, producing a top-ranked drama series can mean a gross profit margin of around 50%. Everyone is hoping to reach the top, Wang said.

Everyone wants to be on top, but not all can make it, and producers and audiences now complain that poorly made productions are flooding the Chinese TV and film market.

Wang Leiqing, at the Shanghai conference, criticized what he called “fast-food productions” with formulaic scripts written for overbooked actors who barely spend any time on set. These productions are “taking shortcuts to shorten the production cycle, but damaging reputations in the long run, and could even hurt the image of China’s entire film and TV industry,” Wang said.

Audiences are starting to rebel, too. The big-budget romance General and I, starring Hong Kong-based singer-actor Angelababy, began airing on Jan. 2. After the first few episodes, the drama’s frequent use of body doubles and chroma key (green screen) compositing became obvious to viewers.

The producers of General and I denied rumors that the body doubles and overuse of green-screen technology was due to the lead actors being so busy filming multiple dramas simultaneously that they could rarely find the time to be on the set together. But the show’s reputation took a hit, and 69% of reviewers on Chinese social media site Douban gave the series a 1-star rating.

It doesn’t help that “there are only about a dozen A-listers in China,” Wang Xiaohui said. “It’s not like Hollywood,” where producers tend to pick from a wider pool of talent.

All anyone wants to think about now is how to make money, Wang told Caixin. Writers who used to spend an entire year polishing one or two scripts now agree to write five or six because a single episode can now earn a writer a whopping 200,000 yuan.

Most major dramas today have about 50 episodes, and audiences frequently complain that producers are deliberately dragging plots out. But the cost of producing dramas is now so high that studios have to produce many episodes before they can break even, Wang said.

To make matters worse, networks and producers are turning to fake viewer ratings to boost their earnings, industry insiders say.

According to the China Television Drama Production Industry Association, when a drama is assigned a primetime slot on a TV channel, the broadcaster frequently puts pressure on the production companies to pay for fake ratings in order to boost the broadcaster’s advertising revenue. At the moment, producers might pay 300,000 to 500,000 yuan per episode for fake ratings, the Association said.

“Out of all the TV ratings we see, 90% are false,” Beijing Enlight Media Co. Ltd. President Wang Changtian said at the 7th Caixin Summit in December.

All this has contributed to serious pessimism amongst film and TV industry players, Su Xiao told Caixin. “Star paychecks have hit record highs, prices for intellectual property and screenplays keep rising, crudely made programs are flooding the market, and ratings fraud is rampant — the industry is being pushed to its limit.”