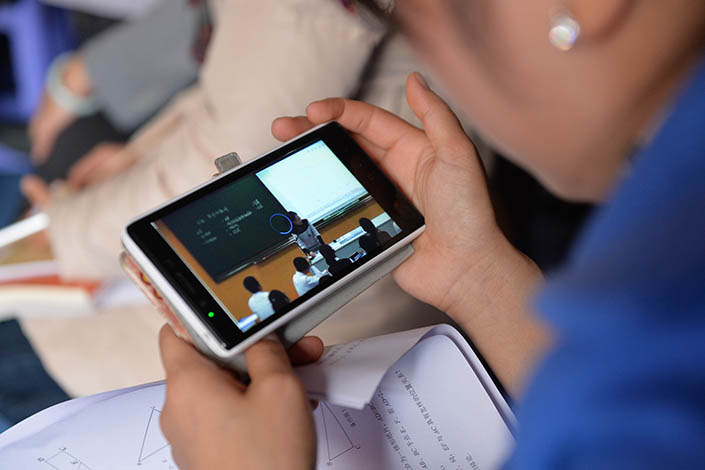 (Beijing) – Imagine the possibility of paying less than 20 yuan ($2.90)—about the price of a cup of coffee--to learn anything you want, anywhere you want, by just using your smartphone.

Now, Chinese Internet companies are cashing in on the rising popularity of paid online courses delivered via social media platforms and mobile apps offering tips on everything from baby care to public speaking.

Xi Da (Shanghai) Network Technology Co., which has been promoting paid courses via a mobile app since June 2016, says it raked in five million yuan ($724,000) on the first day of launching its six to eight minute sessions on public speaking.

It has earned over 30 million yuan from subscribers at the end of last year, the company said.

The most popular courses are those that focus on skills development, and ones that are both educational and entertaining, he added.

Liu Hao, CEO of Meiyeedu.com, a live video-streaming site offering tips on hair styling and makeup, says he launched his first paid course on WeChat in 2014. Nearly 500 to 800 salon owners watch his audio lectures each day and each student is charged 18 yuan per class, he said.

"I gave live lectures at the beginning and later replaced them with prerecorded materials, and now I spend more time interacting with students," he said.

"It has become popular because it’s almost like teaching in a real-life class setting."

Unlike online distance learning programs, shorter paid courses delivered via WeChat and mobile apps don’t help students obtain a college degree or a professional qualification. Instead many are designed as brief self-help programs giving viewers advice or tips on various issues such as career development.

QianliaoEdu, a Beijing-based company offering paid courses via a mobile app, published a report last month showing that lectures on baby care, wellbeing, work-place efficiency and career development were among the most popular ones.

Female participants accounted for 56% of the company’s paid subscribers, according to its survey. Digging deeper into its target audience showed that white-collar workers and those in their 30s and 40s were more willing to pay for these online lectures.

These paid courses are much more popular among people in large cities, with nearly 16% of subscriptions coming from Beijing, Shanghai, Guangzhou and Shenzhen, according to the study.

"Users in large cities are more willing to pay for such content because they face more stress and anxiety in their life and careers," said Sun Quanquan, who works for a Beijing-based online school. "But they're pickier when it comes to quality."

However, most companies offering paid online courses via mobile apps are still running at a loss, similar to many internet start-ups, Yu said.

Xi Da (Shanghai) Network, founded in August 2012, received 60 million yuan in new investment last June，according to Yu. That was in addition to $61.5 million raised during two rounds of fundraising in 2014.

QianliaoEdu says it had 60 million registered users by the end of March and among them, about one million were active on given day. The company says it earns about 10 million yuan each month, but its revenue only accounts for two-fifths of its overall expenditure, according to CEO Zhu Junxiu.