By staff reporter He Chunmei and intern reporter Chen Lu 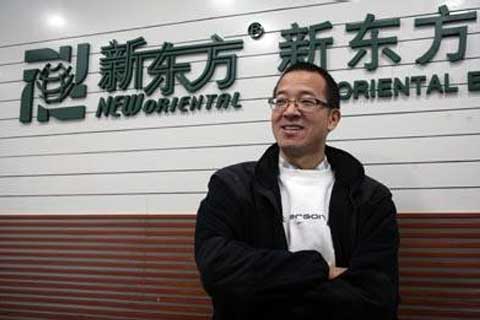 Oddly, these pennants are not ads for New Oriental. They're instead promoting a competitor called Smartstudy, whose online service helps learners prepare for English-language tests.

Some 20 of the Smartstudy teachers pictured on the pennants used to work for New Oriental. Better offers convinced them to jump ship. Maybe that's why they're smiling.

The ad campaign was a brainchild of Wei Xiaoliang, a former New Oriental executive who founded Smartstudy. By advertising outside the front door of his old boss' headquarters, Wei proved he's not afraid to go head-to-head with the world's biggest publicly listed education company.

Wei's challenge is not unique. He's one of several former executives who've left New Oriental to launch new English-learning companies, taking with them clients and teachers, according to an industry source.

New Oriental, which reported a US$ 215.7 million profit on net revenues of US$ 1,138.9 million in the fiscal year ended May 31, still dominates the market for extracurricular self-improvement and professional English-language education in China. But the market is changing, and so is the landscape for market players.

New Oriental enjoyed 20 years of growth, beginning as a company with one teacher in a rented classroom in 1993. Today, it has a presence in every major Chinese city. New Oriental has a sterling reputation that's made it the English education channel of choice for young Chinese preparing to study abroad.

Some analysts and company insiders, however, wonder whether New Oriental's business is reaching its limit. It's certainly at a turning point. That long, steady growth period may be ending, particularly as increasing numbers of learners choose programs that rely on online services.

Growing use of the Internet for education is threatening New Oriental's market share, said an education firm executive who asked not to be named. Instructive services offered by website operators such as Smartstudy are more popular than ever in China. Plus, online companies can offer some of the same services as New Oriental but for cheaper.

New Oriental, the executive said, needs new competitive advantages as soon as possible. "It's entirely possible that others will overtake it now that it's reached a crossroads," he said.

Executives at New Oriental are aware of the competitors nipping at their heels. Other companies "are recruiting students at our doorstep (and employing) famous teachers who used to work for us," a company source said. "Everyone feels jittery."

That jittery feeling is shared by Yu Minhong, New Oriental's founder and chairman. He doesn't like it, and he's promised action aimed at stabilizing the workforce and keeping the company financially healthy.

At an annual meeting with all employees in June, Yu promised the company would adapt to meet the challenges. He outlined plans to raise teacher salaries and give them more freedom to shape curriculum and try new instruction techniques.

"I would rather the company profit less and spend more on teachers and grassroots-level managers," Yu said.

So far, it seems that promise has failed to plug the talent drain. A few weeks after Yu's speech, Sha Yunlong quit his job as senior vice president and principal of the company's school in Beijing.

Wei says the firm's business model has been driving away talented teachers and managers. Although teaching is a creative process, he said, New Oriental makes it drudgery with tight schedules that force teachers to repeat lectures and recycle course materials.

"Those who want more time and energy for educational research have been reduced to common laborers," he said. "Their personal value depreciates quickly."

There are also practical considerations. A teacher who left New Oriental said she resigned simply because she wanted a bigger paycheck.

Salaries for many teachers at New Oriental have fallen substantially since 2011, she said, when the company adjusted its classroom systems, replacing lecture-hall classes of several hundred students with much smaller ones. The transformation increased opportunities for student-teacher interaction, but reduced the instructor's income from each class. Indeed, the teacher said, about one-third of the company's teachers had to take a pay cut as much as two-thirds.

"So when the online teaching companies came recruiting," she said, "they offered salaries several times what I used to make for only half as many courses.

"Even better, teaching online means no commuting between schools every day. The combination of factors makes their offers extremely appealing."

A former New Oriental manager who didn't want to be named said he recommended the company spend more to retain good teachers. He said teacher salaries represent only 10 percent of the company's expenditures.

But some experts say the threats against New Oriental posed by online English-learning companies have been exaggerated. One expert making that argument is Pan Xin, vice president of a New Oriental online learning program called Koolearn.

Pan said he's not worried about teachers leaving the company to start their own business or work for competitors. Neither does he fear a migration of student-customers to New Oriental rivals.

"Only a few famous teachers on the websites have been actually making money," Pan said. "The others must have been essentially teaching for free."

Many teachers who leave big companies such as New Oriental to teach online would eventually return because they want once again to work for a recognized institution, he said.

New Oriental has been adapting, too, although perhaps not fast enough. Its website www.koolearn.com launched in 2000 but got little attention from management until 2010, according to company sources. The site offers access to more than 2,000 courses in a variety of subjects ranging from language to vocational training.

The website now has about 9 million registered users, but fewer than 2 percent have used its paid services, according to New Oriental's latest annual financial statement. It contributed 200 million yuan to the firm's total revenue of more than 6 billion yuan last fiscal year.

Investors have reacted to the company's challenges and adjustments by selling its stock. On July 22, the day New Oriental released its unaudited financial report for the year from June 2013 to May, the firm's share price fell and briefly touched the lowest level in more than one year at US$ 20.31 per share. The price declined even though it reported a 58 percent gain in net profit to US$ 215.7 million.

The firm's preliminary report for performance from June to August said its income for the period has grown by 6 to 10 percent from the same period last year. Many analysts expected a much higher growth rate.

New Oriental says in the report its earnings are under pressure due to "a steady decline in the number of students enrolled in our traditional areas of strength, including English training for adults and test preparation courses." It has also cited a decision to close 23 schools as hurting growth.

But former New Oriental employees were unimpressed. The ATA and Tencent deals only involve marketing and promotion, said one former manager.

The ex-manager also said the company's resources have been spread too thin, making it difficult to support a full-fledged learning website.

"Imagine the headaches that the technicians have" in building a proper, multi-course website without adequate support, he said. "New Oriental has not delved into the nature of education. Nor are the partners it has chosen adept at exploring that nature, or developing smart ways of teaching."

Nevertheless, Yu has mapped out a big-picture plan for New Oriental's future. There's room for websites as well as mobile applications, he said at the annual conference. The company will try to combine online and offline teaching, and bridge gaps that separate existing and future content distribution platforms.

"For now, the managers of New Oriental schools have been preoccupied with holding on to their position and getting better pay," said the former manager. "Moving the emphasis to online (services) would only hurt their interests."