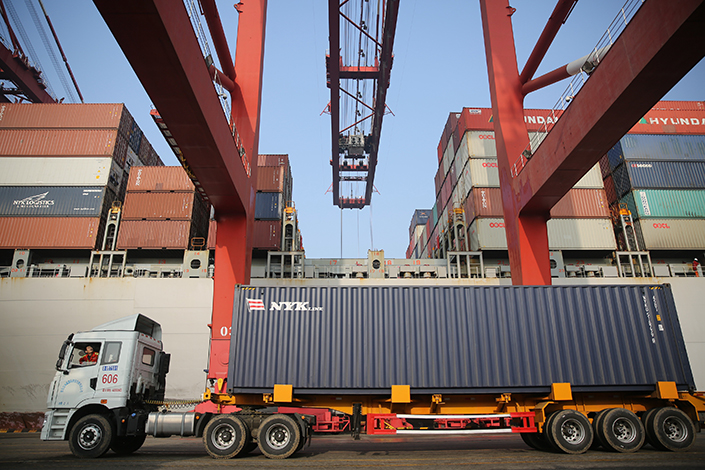 The Qingdao Qianwan Bonded Port Area is seen on March 22. The Belt and Road Initiative has the potential to lift developing countries out of poverty by investing in their infrastructure. Photo: Visual China

The rate of growth for the world’s money supply slowed last year. The slowdown marked a turning point for the world’s economy, ending a liquidity boom period that began after the 2008 global financial crisis. During this period, much debate focused on how quantitative easing had managed to boost an economic recovery in the United States. But the price of this expansionist policy in the United States was often overlooked.

America’s quantitative easing policy epitomized the uncontrolled expansion of global liquidity. The U.S. Federal Reserve’s bid to spur an economic recovery saw assets on its balance sheet rapidly increase to $4 trillion in 2015 from no more than $1 trillion in 2008. The Fed also adopted a benchmark interest rate of zero.

Central banks in Japan and Europe followed suit, rolling out quantitative easing policies of their own and opting for negative interest rates. The persistent pursuit of expansionist policies stimulated economic growth but with negative side effects, including excess money supply.

If gross domestic product (GDP) fails to grow considerably, an excess money supply leads to inflation. We have not seen any clear signs of inflation, though, due to sluggish consumer demand since the financial crisis and the fact that money has been flowing into sectors such as the stock market that are not included in the consumer price index. Also playing a role was a decline in crude oil prices that began in 2014.

Financial service firms prosper by tapping into excess liquidity, even though that money is supposed to be invested in the real economy. So when a frenzied property market pushes office rents higher, for example, a company’s profits can be negatively affected unless the company engages in real estate speculation.

Excess liquidity can hurt a company’s ability to operate efficiently. A company with easy access to financing can garner market share by undercutting competitors with lower prices. But this business model is unsustainable. Meanwhile, companies that can grow steadily with its own assets may be forced out of the market.

Excess liquidity in the financial market can also widen any wealth distribution gaps. For example, middle-class and blue-collar workers who keep their cash in bank savings accounts may see their wealth power diminished by inflation. The wealthy, though, are prone to fewer inflation risks because they have more investment channels and opportunities to diversify their assets than other people. By exacerbating wealth gaps, excess liquidity may in extreme cases foster the kind of populism that’s emerged in the United States and Europe.

Liquidity turns excessive when money supply and economic productivity are out of balance. To address this problem, a central bank can raise interest rates, cut redundant market liquidity by reducing commercial bank assets, and improve productivity. Productivity can be improved in numerous ways, but one sure-fire solution revolves around infrastructure building.

Infrastructure construction is a prerequisite for developing most types of productivity. Today’s internet technology-linked market, for example, requires stable electricity supplies and telecommunication facilities. Undoubtedly, plenty of demand still exists for such new infrastructure in many parts of the world.

Demand for infrastructure is also high in the United States. For example, about 10% of all U.S. bridges are defective, according to the Federal Highway Administration. The American Society of Civil Engineers says sections of about 32% of all American motorways are in poor condition. The U.S. Chamber of Commerce has estimated that demand for transportation, energy and water utility investments would total $8.2 trillion between 2013 and 2030.

There’s high demand for refurbishing worn-out infrastructure in big cities such as New York and Los Angeles, as well as upgrading intercity transportation systems. The fastest train traveling between Boston and New York takes nearly four hours to cover 340 km. But in China, it takes only five hours for passenger trains to travel the 1,200 km between Shanghai and Beijing.

Making infrastructure more efficient tends to revitalize economic activity. Over the past three decades, for example, investment in infrastructure has played an important role in boosting China’s economic growth. For example, China had 124,000 km of railways at the end of 2016, with 22,000 km of that track devoted to high-speed trains, more than any other country in the world. Every year, China’s railways carry an average 30 tons of cargo and 2.8 billion passengers. China’s is an efficient transportation system that’s contributed to logistics and commercial development.

In developing countries, especially those in which social classes are deeply divided, infrastructure construction projects can effectively make social and economic development more efficient, reduce class inequality, and give people at or near the bottom of the social ladder a way to climb higher. Public resources can thus help improve opportunities for people on the lower rungs.

Efficient transportation can connect regions looking to build on respective advantages and share resources. This is a lesson that’s been learned in China, where major highways stretch more than 100,000 km combined.

India, meanwhile, had only one major highway at the end of 2015. And in Africa, only 30% of the continent’s households have electricity.

In developed economies, public infrastructure resources are accessible to members of every social class. In the United States, for example, the interstate highway system and airports built in the 1950s have played an important role in lifting the country’s economy and giving most people a chance to live the American dream.

In recent years, though, infrastructure building has stalled in the United States, with total infrastructure investment averaging only 2.4% of the nation’s GDP. Inefficiencies related to infrastructure have contributed to the manufacturing sector’s decline and thus hampered economic growth in some U.S. cities and regions. One result has been the emergence of protectionism and populism.

In 2013, China launched the Belt and Road Initiative, an economic initiative that aims to boost trade and cooperation along the ancient Silk Road between Asia and Europe. As part of this initiative, China has committed itself to protecting a free and open global trade system, and investing in infrastructure with capital from different countries that’s pooled together.

The Belt and Road is a win-win strategy for China and other economies. An efficient transportation system, telecommunications, and reliable supplies of electricity and water comprise an indispensable foundation for economic growth.

But in less-developed countries that lack this foundation, opportunities for generating wealth have been seriously limited. Better infrastructure is needed. An average $1.5 trillion to $1.7 trillion should be invested every each year in infrastructure construction in the Asia-Pacific region, according to the Asian Development Bank.

Meanwhile, the Belt and Road is opening developed countries to opportunities for steady returns on infrastructure investments while giving market players a chance to apply advanced technologies. The initiative is thus an effective means through which capital supplies can be matched with market demands and thus boost productivity.

More importantly, the Belt and Road has the potential to generate tremendous social value. Advancing globalization via infrastructure construction can enhance regional economic connections and improve the competitiveness of less-developed countries by tapping their resources. It can reduce regional friction, and also may help address global challenges such as terrorism and the refugee crises.

Against the backdrop of the world’s excess liquidity, the Belt and Road Initiative offers infrastructure construction opportunities that provide investment returns while also generating economic value and social benefits.

If people in less-developed regions focus on achieving economic growth while their living standards rise to new heights, will they still want to stage suicide bombing attacks?