Lack of Conservationists Leaves Rare Artifacts in State of Decay 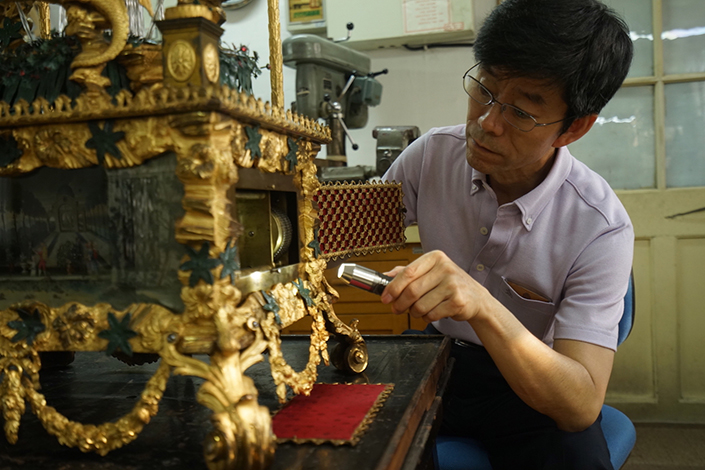 Wang Jin, a craftsman at the Forbidden City, restores a clock which used to belong to Emperor Qianlong (1711-1799). Photo: IC

(Beijing) — The first-ever comprehensive survey of China’s movable cultural relics has revealed that nearly a third of all “rare artifacts” in need of urgent restoration were left to deteriorate due to the lack of skilled conservationists at town and county level museums.

The survey by the State Administration of Cultural Heritage inspected more than 100 million artifacts including ancient coins, books, clay and porcelain ware from 2011 to 2016. The undertaking cost the public coffers over 12 billion yuan, the ministry said.

“Over 3.8 million items were identified as rare items and nearly one-third of them are in need of urgent repair,” said Liu Yuzhu, director of the cultural heritage administration. “But only 1.5% of them have received the necessary care and repairs given the shortage of qualified professionals.”

While national museums are better equipped to protect precious artifacts, items at smaller facilities are more prone to fall into disrepair given the severe shortage of archeologists and skilled restoration staff, according to Duan Yong, head of a unit in charge of museums at the heritage administration.

There is also a grave lack of awareness of techniques to help address challenges such as the so-called bronze diseases caused by oxidization and other chemical reactions, which creates a thin layer of green powder on the surface of bronze artifacts resembling a fungus, he said.

Museums, particularly those at the grassroots level, will be offered more funding to strengthen programs to protect paper and silk artifacts, Duan said.