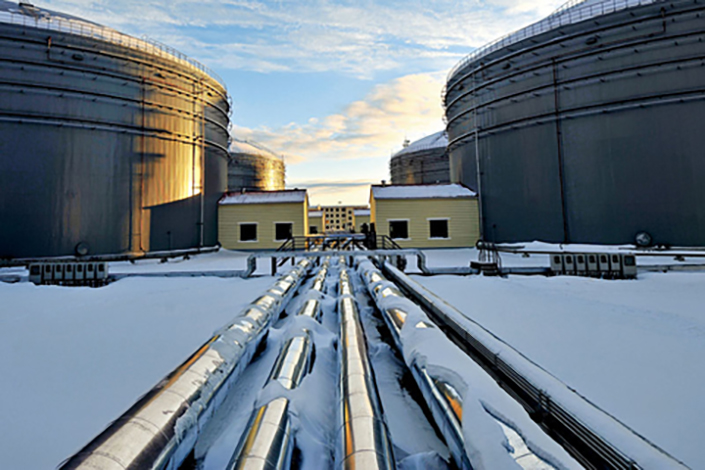 The Myanmar-China pipeline project officially began operation on Myanmar's Made Islandas an oil tanker started offloading 140,000 tons of crude oil from Azerbaijan at the Bay of Bengal on Monday.

(Beijing) — An oil pipeline running through Myanmar into China opened this week after years of delays, reducing China’s dependence on shipments through the contentious South China Sea and the piracy-plagued Strait of Malacca.

Chinese President Xi Jinping and Myanmar President Htin Kyaw witnessed the signing of the agreement on Monday in Beijing. Hours later, a tanker began offloading oil at Made Island, the terminus of the Myanmar side of the line, according to China’s official Xinhua News Agency.

As the world’s second-largest oil consumer, China is dependent on imports, which accounted for a record 65% of its total oil usage in 2016. Of those imports, 80% was transported through the Strait of Malacca, where piracy has long been a threat to commercial ships and fishermen.

The pipeline — part of Xi’s One Belt, One Road infrastructure initiative — will allow China to import up to 22 million tons of crude a year, or around 4% of the country’s total annual demand.

Construction, which began in 2009 and was completed in 2014, winds through varied terrain of coastal lowlands, valleys, hills, and plateaus, many with poor infrastructure.

But after the project’s completion, the two countries were unable to finalize an agreement, largely because of political turbulence and environmental issues.

Myanmar has experienced intermittent political uncertainty since its first civilian government in 49 years took power in 2011. Environmental concerns on the Chinese side of the border, in Yunnan province, have also contributed to interruptions.

China National Petroleum Corp., the Chinese co-builder of the project, initially planned to build an oil refinery in Yunnan to process crude from the pipeline, but construction was suspended in 2015 by China’s Ministry of Environmental Protection because the company didn’t submit the required environmental assessments.

The plant, belatedly finished in late 2016, will refine an estimated 13 million tons of crude each year.

China has started developing a second link with Russia that can bring in 15 million tons of crude each year. That pipeline is due to be finished in January.