By Yang Yanwen and Yang Ge 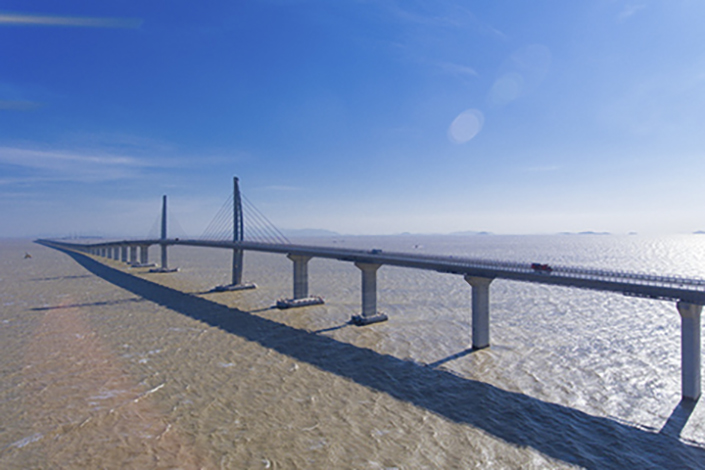 (Beijing) — A $17 billion bridge that could charge up the Pearl River Delta economies of Hong Kong, Macau and the sleepy mainland city of Zhuhai is on track to reach a major milestone later this year, when the Hong Kong portion of the massive project is expected to be complete.

That assessment came on Thursday from officials at the Hong Kong Highways Department, who said the Hong Kong section of the bridge linking the two special administrative regions with the scenic mainland city of Zhuhai should be complete by the end of this year. That could put the complex project on track to finally open by 2020, after running years behind schedule and costing well over its original budget.

When it does open, the bridge could be a game-changer for the region, providing a key link enabling manufacturers to move to the cheaper western side of the Pearl River Delta from their current eastern-bank locations where costs are soaring in cities like Shenzhen and Dongguan. That could result in a renaissance for factories in an area that gave China its earliest moniker as “Workshop of the World.”

“This is a relatively significant bridge,” said Christopher Balding, an economics professor in the HSBC Business School at Peking University Shenzhen. “There are still areas where it’s feasible to do low- and medium-end manufacturing in the area, but they have to be out of Shenzhen. The bridge would be a way for manufacturers to locate out of Shenzhen, and still access their suppliers.”

In its latest update, the road authority said precast liner segments were nearly all in place for a tunnel that forms a key part of the Hong Kong part of the project, and that necessary connections were made to an elevated expressway at the end of March. That led officials to say that the entire 12 km Hong Kong section of the project should be linked up by the end of this month.

Upon completion, the overall project will include three lanes in either direction, spanning 55 km with a series of roads and bridges, with artificial islands constructed at its two main terminals. Construction for the project began in 2011 and carried an original price of about $10.6 billion, with a target completion date of last year. But delays and overruns have pushed its latest cost up to $17 billion or more, and an official from Guangdong province was quoted in 2015 saying even 2020 could be an optimistic opening date.

When it finally is complete, the bridge could reduce travel times between the eastern and western sides of the Pearl River Delta from as much as four hours now to as little as a half hour.

The bridge is part of a broader effort to integrate the entire Pearl River Delta area, similar to efforts now underway in the Yangtze River Delta around Shanghai and an emerging similar zone around Beijing. The planned area centered on Beijing saw a new twist last week, when the central government announced a major new urban center being set up in a three-city area known as Xiongan about 100 km south of Beijing in Hebei province.

In the Pearl River Delta, the regional integration also includes building a section of high-speed rail to link up Hong Kong with China’s state-of-the-art bullet train network. It also includes a commuter-style express rail link connecting the cities of Hong Kong, Shenzhen and Guangzhou, capital of Guandong province, which is nearing completion.

Balding said the entire Pearl River Delta area that could eventually be included in an emerging South China zone is home to as many as 75 million people, bigger than most countries and roughly equivalent to the entire population of Germany.

“In reality there’s a very real need to integrate all these cities,” said Balding. “One of the things you do see (from Hong Kong and Macau) is an acceptance of the economics that, ‘Look we’re increasingly tied to the mainland economically and financially.’ The softer issue is (central leaders in Beijing) want to continue to draw Hong Kong into the cultural and infrastructure orbit of the mainland. So there’s hard and soft objectives they’re trying to achieve here.”