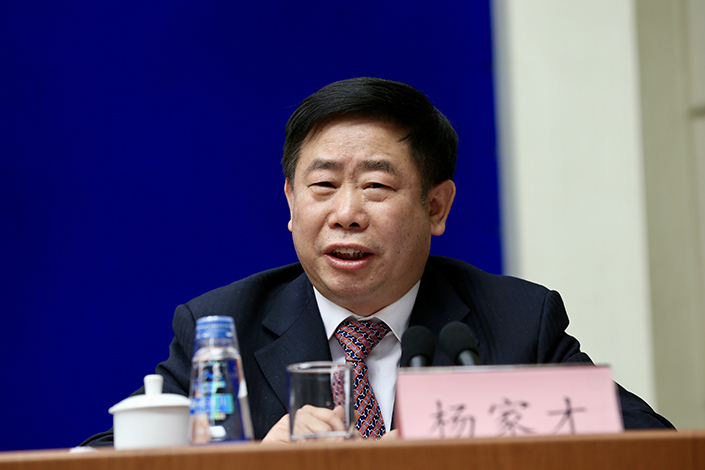 A senior official of the China Banking Regulatory Commission has been relieved of his duties while a high-profile corruption investigation of the insurance watchdog’s chairman is underway.

Authorities haven’t given an official explanation for the absence of the senior official — CBRC Assistant Chairman Yang Jiacai — who hasn’t showed up to work this week, people with knowledge of the matter told Caixin.

The Communist Party’s Central Commission for Discipline Inspection had said on Sunday that Xiang Junbo, the head of the China Insurance Regulatory Commission, is being investigated for “serious disciplinary violations,”  a common Communist Party euphemism for corruption.

Xiang is the highest-ranking official of a financial supervisory body to be caught up in the anti-graft campaign launched by President Xi Jinping in 2012. The inspection commission launched an investigation a year ago into corporate raids by insurers that were funded by high-risk, high-yield policies allowed under liberal rules introduced under Xiang’s watch.

Yang was no longer supervising operations at the banking regulator as of Monday, the sources within the CBRC said.

Caixin reporters’ calls to Yang’s cellphone have not been returned.

Before the change, Yang, 56, had been simultaneously in charge of several functions at the CBRC, including the general office, human resources, and the department of non-bank financial institutions regulation. These duties have been taken over by Vice Chairman Cao Yu, the sources said.

People in different departments in the CBRC offered different accounts to Caixin about Yang’s whereabouts. One said he went to participate in a “special task” with the central government; the other said he left to attend a central government study program. It was also suggested that he is on a business trip.

The CBRC’s press department has not responded to Caixin’s inquiry for clarification.

Yang last appeared at a CBRC new conference on April 7 to talk about the regulator’s supervisory tasks this year. He interacted comfortably with the reporters.

“The CBRC is a government watchdog. The media is a market watchdog. We are all watchdogs,” he said.

Yang began work at the People’s Bank of China in 1988. He moved to the CBRC in 2003 when the banking supervisory function was separated out of the central bank. He was promoted to assistant chairman in 2013.

Although authorities have not said what exactly Xiang is being investigated for, just three hours after the announcement of his fall, the Chinese government’s website published the full text of Premier Li Keqiang’s speech in an anti-corruption meeting in late March. Li emphasized that the authorities will seriously punish government supervisors who collude with company executives and “financial crocodiles” to make illegal gains.

“More drama is expected,” the People’s Daily said in an analysis article on its social media on Monday, commenting on the timing of the release of Li’s speech.