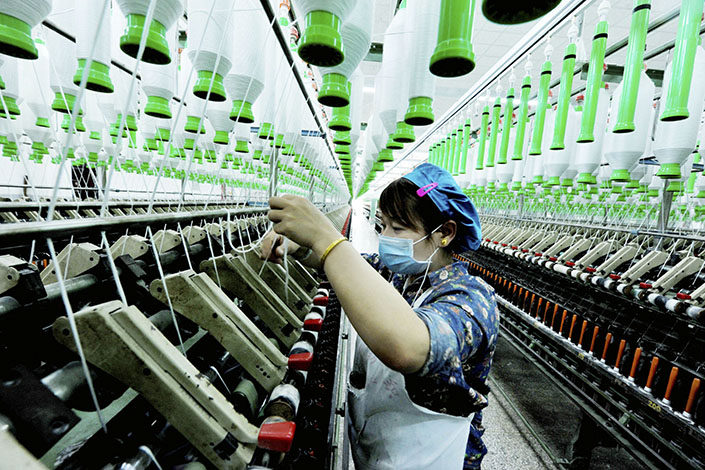 Gross domestic product (GDP) in the world’s second-largest economy expanded by 6.9% in the January-through-March period from a year earlier, the National Bureau of Statistics (NBS) said, after an increase of 6.8% in fourth quarter of 2016 that was the first pickup in two years.

The growth rate, which beat the median estimate of 6.8% in a Caixin survey of 10 economists, restores China’s expansion to the same pace as the third quarter of 2015, and gets the economy off to a good start to exceed the government’s full-year target of around 6.5%.

He also pointed to accelerating growth in the consumption of services and some “quality” goods, and a higher contribution from exports of goods and services. Net exports added 4.2% to GDP in the first quarter, compared with a negative contribution of 11.5% in the same period last year.

Premier Li Keqiang in March announced a GDP growth target of “around 6.5% or higher if possible in practice” for 2017, lower than the range of 6.5% to 7% set for 2016. The government is aiming to balance the need to keep the economy growing strongly enough to prevent unemployment from rising, with the need to control debt and financial risks, tackle overcapacity in industries such as coal and steel, let so-called zombie companies fail, and push forward with an overhaul of state-owned enterprises.

The government’s campaign to curb excess capacity last year led to tighter production and supplies, which boosted the value of output even as volume increases have been less impressive.

Industrial output rose 7.6% from a year earlier in March by value after taking inflation into account, the fastest pace since December 2014. It was well ahead of the median estimate of a 6.2% rise in a separate Caixin survey of 12 economists and compared with 6.3% growth in the January-February period.

A breakdown of the data from the NBS shows that in the first quarter, steel output rose by 4.6% in volume terms after a drop of 3.2% a year earlier. Vehicle manufacturing in value terms jumped by 15.3%, while by volume, the number produced rose by 9%.

Nominal retail sales, which include spending by households, government departments and business and exclude spending on services, rose by 10.9% year on year in March, up from 9.5% in the first two months and higher than the median estimate in Caixin’s survey for a 9.4% increase.

Fixed-asset investment excluding rural households rose by 9.2% in the first quarter from a year earlier, beating the median projection of 8.7% in the Caixin poll and up from 8.1% for the whole of 2016. It was the highest growth rate since the January-through-May period last year and yet again was driven by infrastructure spending.

Government-backed investment in infrastructure, which includes roads, railways, and environmental projects, increased by 23.5% from a year ago, faster than the full-year 2016 pace of 17.4%, and of 19.6% in the first quarter last year.

Analysts have cautioned that the recovery shown in the official data may not be sustainable as the effects of measures to cool the real estate market take hold, while monetary policy is also expected to tighten as the government tries to rein in debt, especially financial leverage, and pushes market interest rates higher.

“We expect the external setting to remain conducive in the rest of 2017 but think that domestic demand momentum will ease on slowing real estate activity and a somewhat less-accommodative macropolicy stance,” said Louis Kuijs, a Hong Kong-based analyst with research firm Oxford Economics.

“Looking further ahead, the question is when the leadership will move toward a more significant slowdown in credit growth to put growth on a more sustainable footing,” he said.

More than 40 local governments have imposed restrictions on home purchases since the end of September in a bid to rein in surging real-estate prices. Some have stepped up curbs since March 17 as prices defied earlier controls. That’s caused transactions to stall and sparked concerns that the slowdown will feed through to industries linked to real-estate construction such as steel, cement, glass, and even household “white goods” such as refrigerators.

About 25% to 30% of China’s GDP is linked to final demand from the property and construction sectors, Moody’s Investors Service estimates.

The property sector continued to provide traction for the Chinese economy in the first quarter as year-on-year growth in both real-estate investment and new-housing starts accelerated in March from the first two months in spite of the government’s control measures. However, the increase in home sales measured by floor space and land acquisition by developers moderated in March from the January-February period, indicating the curbs are starting to take effect.

Mao, the NBS spokesman, said the impact of the latest round of property tightening since mid-March will “probably show up in a gradual manner from April.”

The campaign to reduce overcapacity and close down loss-making and debt-laden companies known as “zombies” may also add pressure on growth prospects. In addition to denting production and boosting nonperforming loans at the nation’s banks, layoffs could impact household income and restrain consumption.

Job losses and lower payroll costs will be “a positive for debt servicing and firm survival, but a negative for consumption in regions with concentrated sectors,” said Jackson from IHS Global Insight.

Premier Li said last month that nearly 1 million workers this year are expected to be “relocated” — a euphemism for job losses — as the drive to eliminate excess capacity, which began in the coal and steel industries last year, expands to include the coal-fired power generation sector.

Despite the uptick in their 2017 GDP projection, Nomura International economists said they still expect the pace of expansion to moderate over the next three quarters, slowing to 6.6% in the last three months of the year.

“Our view of a downward quarterly growth path in 2017 remains intact, as we expect the property sector to cool in coming quarters and as export growth likely peaked in the first quarter,” they said in a report.