Farmers, Fishermen Wonder What New Economic Area Will Mean for Them

By Xia Weicong and Wu Gang 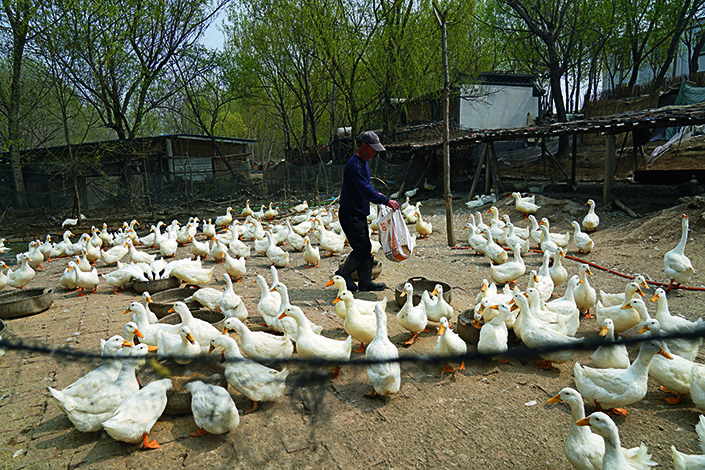 Yuan Sanwang, 65, lives in a house that he built himself in Nanhe village near the Baiyangdian wetlands. The house is smaller than 30 square meters but has a duck yard of 100 square meters. Photo: Yang Yifan/Chen Weixi/Caixin

(Anxin, Hebei province) — The huge new economic development area slated for south of Beijing could vastly change an old way of life for farmers, fishermen and others whose livelihoods are rooted in major wetlands that are located within the zone.

Yuan Sanwang, 65, has been raising ducks at Nanhe village around the Baiyangdian wetlands for 33 years. A few days before the announcement of the Xiongan New Area, officials told him his duck farm would have to be relocated. He hopes to find another wetland area 100 km away in Laiyuan county to continue his duck-farm business.

Xiongan will become a special economic area that may rival Shenzhen and Shanghai’s Pudong, China’s groundbreaking reform frontiers that boosted the country’s rise to the world’s second-largest economy. Xiongan is also part of the central government’s ambitious plan to relieve some of Beijing’s metropolitan burdens, and to better coordinate the development of the Beijing-Tianjin-Hebei region in northern China.

Some people living around the wetlands worry they may be relocated. Others hope their lives will get a major boost if money and resources pour in. Dozens of state-owned companies have already promised to support the government’s strategic move.

Liu Hui, 29, a young fisherman, is not worried that he may have to give up fishing to find another job. But he is worried that the area’s property prices will soar and he won’t be able to afford to continue to live there.

“I’m still a farmer, a lifelong farmer,” he said.

But he also expressed hope that the major development will also bring with it a government effort to help clean up the polluted Baiyangdian.

“When I was young, we could directly get a pot of water from Baiyangdian and drink it,” he said. “Now it has become dark red like sauce, and the fish taste like diesel.”

Detailed plans of Xiongan’s development have not been released. Villagers express anxiety about their futures and whether they will be relocated.

“They said our place will be like Shenzhen, or even better,” Li said. “But I haven’t been to Shenzhen. I don’t know how much better it could be.”