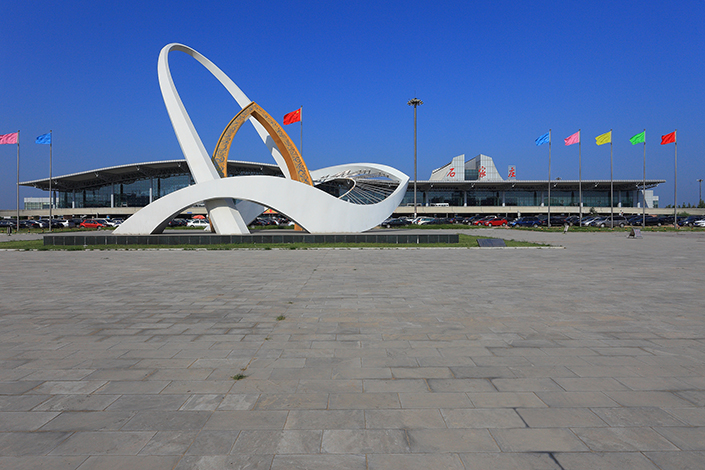 Shijiazhuang Zhengding International Airport is the closest airport to the Xiongan New Area. The Civil Aviation Administration of China plans a new terminal in Xiongan where passengers whose flights take off from Shijiazhuang can obtain boarding passes and check in baggage before taking a shuttle or high-speed train to the airport. Photo: Visual China

(Beijing) — China’s leading telecom operators have promised to roll out their next-generation 5G network in the Xiongan New Area, the recently announced economic powerhouse near Beijing, as more infrastructure projects, including an airport terminal, are set to follow.

The decision comes just 10 days after the central government announced surprise plans to create the Xiongan New Area, 130 kilometers south of Beijing, to relieve pressure on the capital’s infrastructure.

Two of China’s three largest telecom corporations, China Mobile Ltd. and China Telecom Corp. Ltd., said in statements that they would first trial their 5G internet service in the new zone, to help “develop it into a green and smart city.” A third major operator, China Unicom, announced it would construct a high-standard telecoms network and ensure the best resources would be put into the project.

All three communications giants have established teams specifically to deal with Xiongan’s development, according to their statements.

The move will be another major step forward in China’s rollout of the 5G network, an upgraded telecoms technology that is faster, more efficient and stable. There has been no timeline to launch the network as yet, but China Mobile said it will start 5G trials in 2018,  with a target to commercialize it by 2020, while China Telecom called for resource sharing among rivals to build the network.

As a future economic center, Xiongan, which was born out of three once-obscure counties where only a feeder railway passes, requires a huge expansion in transport infrastructure.

Shijiazhuang Zhengding International Airport, in the capital city of Hebei province where Xiongan belongs, is so far the closest airport to the new zone, within two hours’ drive from the zone. Airport managers plan to build a new terminal in Xiongan where passengers whose flights take off in Shijiazhuang can obtain boarding passes and check in baggage before taking a shuttle or high speed train to the airport, according to a report in the Civil Aviation Administration of China’s CAAC News.

Although details of the infrastructure plans haven’t been specifically outlined, especially regarding sources of investment, He Lifeng, the director of China’s top economic planner the National Development and Reform Commission, said that the new economic zone will take in funds from the private sector.

“Xiongan will attract capital of at least $1 trillion,” a senior professional from the finance sector told Caixin.