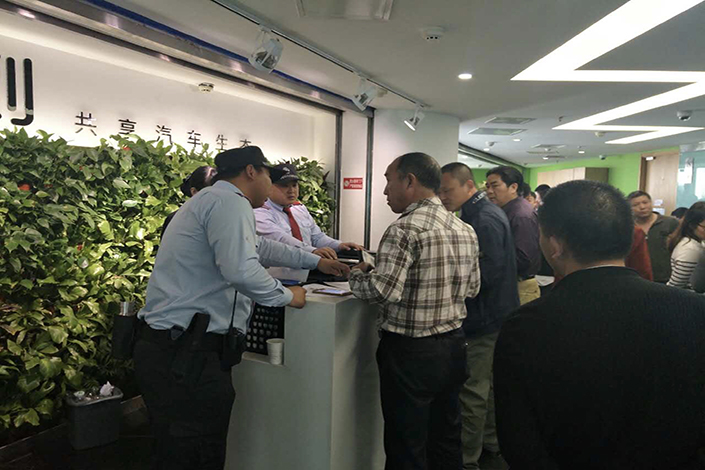 Yidao Yongche drivers descend on the company's headquarters in Beijing on Tuesday to demand payment. Drivers with the ride-hailing company have been complaining for several months that they have had difficulty transferring money out of their company accounts. Photo: Liu Xiaojing/Caixin

“What Yidao is facing is not simply a debt dispute,” claimed Zhou, who said he left the company months ago. “It may trigger a mass incident that could hurt social stability.”

LeEco and Yidao shot back late Monday, saying the accusation by Zhou was “a stab in the back.” Yidao earlier told Caixin that because of “technical adjustments,” some drivers may have experienced temporary payment disruptions, but implied that company operations were running normally.

LeEco said that the 1.3 billion yuan Zhou claims was “misappropriated” was actually meant for its car-manufacturing business, and that it had promised Yidao only 100 million yuan, which it said it supplied.

In November, LeEco CEO Jia Yueting revealed a severe cash shortage brought on by excessive spending in capital-intensive businesses such as manufacturing cars and smartphones, and in sports deals.

Ride-hailing also taxed LeEco’s finances, as the company heavily subsidized rides early on to attract customers — payments it would eventually have to account for.

“Ride-hailing is known for its tremendous burn rate,” said Zhang Yi, CEO of consulting firm iiMedia, referring to the heavy subsidies paid to drivers and passengers in the battle to outprice competitors. “When even behemoths like Didi (Chuxing) are struggling for a positive cash flow, we can assume that Yidao is having a tough time.”

Yidao leads among the smaller competitors, with 4 million active users in February, far behind Didi, which now claims over 80% of the market. But its number of users has declined by around 10% each month since December, according to figures from consulting firm Analysys.

“There wasn’t a distinct decline in orders, but when drivers like me discovered around January that we couldn’t access the money we made, we left,” said Michael Yan, a former driver in Shanghai who said the app denied his requests, made daily over the course of two months, to withdraw 600 yuan that he had earned taking passengers.

“That began a vicious circle, where there are no drivers, and passengers then lose patience and switch to other services,” Yan added.

Yidao has yet to receive an online car-hailing license, stipulated by the regulators since November.