By Li Zengxin and Fran Wang 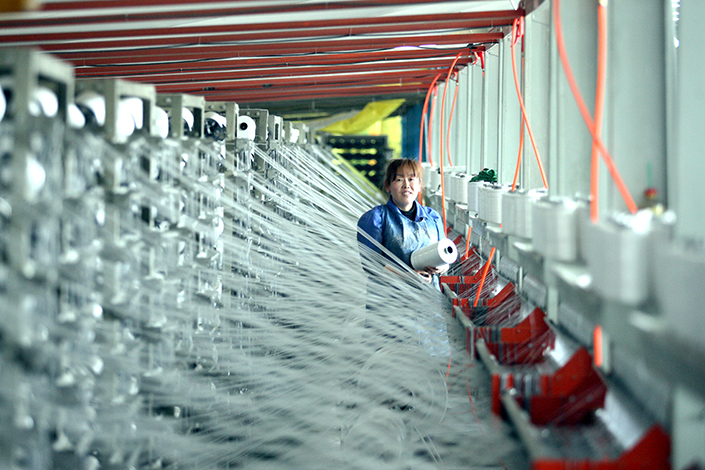 The International Monetary Fund raised its projection for China’s economic growth in 2017 to 6.6%, but warned that the country’s reliance on debts could present serious problems in the long term. Above, A worker makes plastic bags in a company in Suihua, Heilongjiang province. Photo: Visual China

But it warned that the country’s reliance on debts — funded through an “increasingly opaque and complex financial system” — to drive growth will eventually raise the specter of a “disruptive” correction in growth in the longer term.

The latest IMF prediction of expansion in the world’s second-largest economy, released Tuesday in its quarterly World Economic Outlook report, was up from its January forecast of 6.5% and October estimate of 6.2%.

The uptick “reflects the stronger-than-expected momentum in 2016 and the anticipation of continued policy support in the form of strong credit growth and reliance on public investment to achieve growth targets,” it said. The ruling Communist Party intends to keep economic expansion stable as it embraces a major leadership reshuffle in late 2017, the report said.

But the IMF described China’s dependence on fast-expanding credit as “dangerous” and said it expects “limited progress” in addressing the problem and the corporate debt overhang.

“The resulting persistent resource misallocation, however, raises the risk of a disruptive adjustment in China in the medium term,” the IMF said.

An “intensified focus” is needed on containing financial risks in domestic capital markets by controlling shadow-banking products and strengthening supervision, it said.

“China’s very important rebalancing process will be more sustainable if it is accompanied by reforms to put state-owned enterprises on a hard budget constraint basis, to upgrade financial regulation, and to rein in domestic credit growth,” Maurice Obstfeld, the IMF’s economic counselor and director of Research, said at a news conference to release the report.

Growth in the Chinese economy hit 6.9% year-on-year in the January-through-March period, bolstered by higher investment, improving foreign demand and continued strength in the property market, official data published on Monday showed. It exceeded the government’s full-year growth target of about 6.5% and accelerated from an increase of 6.8% in fourth quarter of 2016 that was the first pickup in two years.

Several investment banks have revised up their predictions on China’s growth this year following the Monday release. Nomura raised its forecast to 6.7% from 6.5%, while JPMorgan Chase & Co. changed its estimate to 6.7% from 6.6%.

Top Chinese leaders at a key December meeting to chart economic policies for 2017 vowed to elevate steps against financial risks “to an even more important position” as corporate and local government debt mounted.

Research firm Oxford Economics estimated China’s total outstanding credit, which includes bonds issued by local governments, grew 16.1% in 2016 year-on-year compared to 15.2% in 2015. And government, commercial and consumer debt levels rose to about 260% of gross domestic product at the end of 2016, up from 250% a year earlier.