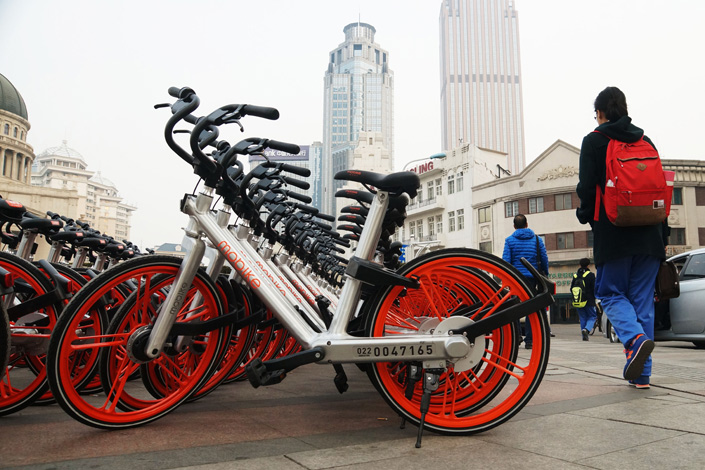 (Beijing) — The northeastern port city of Tianjin is weighing new rules to keep bike-sharing firms in check, following in the tracks of other urban centers whose streets and sidewalks have been choking on a flood of colorful two-wheelers.

Bike-sharing firms like Beijing Mobike Technology Co. and Ofo Inc. would need to employ at least 50 offline service personnel for every 10,000 of their vehicles on the streets, and all bikes would have to carry GPS devices, according to draft laws published Saturday.

Those requirements emulate many guidelines published since December by seven cities, including Shanghai, Shenzhen and Chengdu, all seeking to rein in an industry flush with billions of dollars in venture cash being used to flood Chinese city streets with millions of bikes.

The new generation of bike-sharing services is similar to many older municipal peers that let customers register for the right to use loaner bikes for short rides. But unlike older services with complex registration processes and specific parking points, newer names like Mobike allow easy registration and pickup and parking nearly anywhere.

The Tianjin draft rule, which is open for public comment until May 7, is aimed at addressing municipal officials’ concerns over issues like irresponsible parking that clutters sidewalks, and liability issues when accidents occur. The rule says bikes need to be parked in designated zones, and haphazardly parked bikes will be dealt with by local officials tasked with maintaining orderly streets.

Tianjin’s proposed regulations are more basic than those in Shanghai, which has imposed limits on the number of bikes allowed and bans users who are very tall, short, heavy or young from accessing services. Shanghai has also proposed retiring all bikes after three years out of concerns over safety due to ordinary wear and tear.

Shanghai has also asked six major operators to refrain from adding new bikes to the city, already crowded with 450,000 shared bikes, according to news reports. Beijing has asked each of the city’s districts to impose a cap on the number of bicycles to rein in breakneck expansion.