Bike-Sharing Latecomer Youon Seeks to Be First to Go Public

By Liu Xiaojing and April Ma 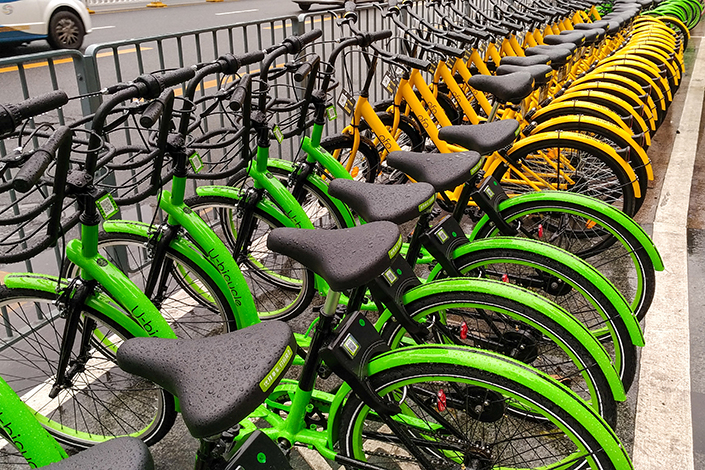 Two-wheelers of several bike-sharing companies crowd a street in Shenzhen, Guangdong province, on March 19. Youon Bikes, a newcomer to the booming nascent industry, is the first Chinese bike-sharing company to seek permission for an initial public offering. Photo: Visual China

(Beijing) —Youon Bikes has become the first of China’s horde of bike-rental firms to receive a green light to go public this year, though it faces fierce competition as a latecomer in a crowded sector.

Based in Jiangsu province, Youon has focused mainly on selling and managing city-run bike-rental systems, with fixed return docks distributed on major roads. These city systems have begun to be overtaken by private bike-sharing services, which allow riders to pick up and leave bikes almost anywhere in a city.

When private bike-sharing became an investment frenzy in late 2016, Youon hopped on the bandwagon, launching similar services with its yellow and blue two-wheelers in 10 cities.

Though it lags far behind private bike-share leaders Ofo and Mobike in ridership, the company is planning to raise nearly 600 million yuan ($87 million), or 25% of its shares, within six months in an initial public offering on the Shanghai Stock Exchange.

But in its transition from a fixed-station, municipal bike-rental provider to a competitor in the fast-growing leave-anywhere bicycle market, it faces scrutiny from regulators who fear a decline in the company’s traditional public-service function, according to a securities regulator statement.

Youon has been required by regulators to re-examine its future business model and determine whether its new business will compete with or replace its existing one.

In an updated version of the company’s prospectus published last month, over 300 references were made to the buzzwords “bike sharing” — a phrase mentioned only 10 times in the original 2015 version. A paltry 0.05% of the firm’s earnings are brought in from private bike-sharing, according to the updated prospectus.

The company was in talks to raise funds for its private bike-share division in March, but the plans were terminated within a month after the industry in general came under fire for obstructing roads and sidewalks with their sheer numbers and often careless riders.

Market hype has mounted around bike-sharing, which has attracted billions of dollars in venture capital investment and induced long-running manufacturers such as Phoenix and Forever to leverage their brands in the game.

But enthusiasm builds and fades fast on the volatile secondary stock market, and as the first bike-share company to go public, Youon’s prospects are uncertain. Bike-maker Phoenix saw its shares triple last year when the company announced it was entering the business, but they have since fell back to their original level.

Stocks for bike component-makers have also begun to see declines as authorities begin considering rules to oversee the poorly regulated area and city residents voice frustration with the unruly industry.