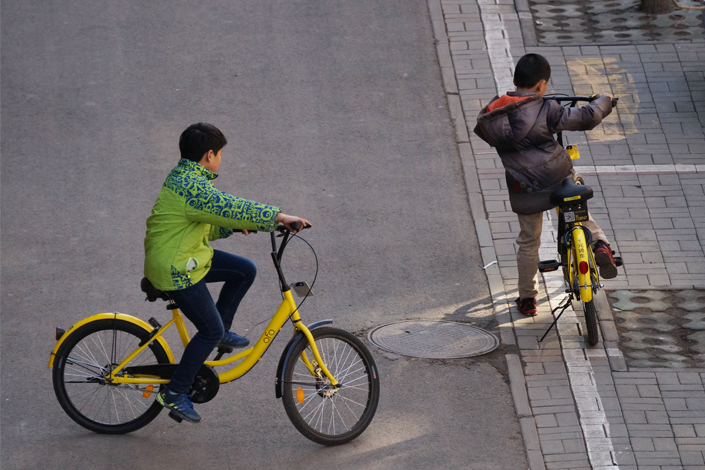 (Beijing) — A traffic accident that killed an 11-year-old boy using a shared bike has sparked heated debate over whether companies offering bike-rental services in China’s loosely regulated market are in any way liable for the death of a user.

A fourth-grade boy was struck by a tour bus making a turn at a busy intersection in Shanghai’s downtown area, while riding a yellow shared bike with a friend on Sunday, witnesses said. He was rushed to a hospital where he died from severe brain trauma. His friend was unharmed.

This is the first known fatality involving a user of a rental bike, which have continued to flood the streets and sidewalks of major Chinese cities since last year, and are accessible to anyone with a smartphone and an online payment app.

Road traffic safety laws in China already specify that children under the age of 12 are not allowed to ride bikes on public roads.

Beijing-based Ofo, one of the leaders in the shared-bike market and the company whose service the boy used, issued a statement on Tuesday saying that it was working with local police to investigate the cause of the accident. The company said it is assessing ways to prevent children under 12 from using its bike rental services, to avoid similar tragedies in the future.

However, the operator of over 250 million conspicuous yellow bikes across the nation has not indicated whether it plans to compensate the family of the deceased.

The tragedy comes as regulators prepare to tighten controls on the freewheeling, but largely unchecked, bike-sharing sector fueled by vast amounts of venture capital.

Recent draft guidelines from the Shanghai government say bike-sharing operators that provide services in the city should ban children under age 12 from using their apps.

Users are currently required to provide citizen identification numbers when they register with most bike-sharing companies, including Ofo, making it possible for platforms to determine the age of each user. However, these platforms currently lack the ability to bar those under 12 from using these services.

Chinese netizens disagree as to how much responsibility firms must bear in the face of a traffic accident.

“Nearly 80% of the responsibility lies with the parent or guardian, while the driver is to blame for 20%. If the bike rental firms are held accountable for this incident, then we should blame the maker of a blade in a knife murder,” remarked Ipevc, a Weibo user.

Others believe operators are accountable for the lax management that makes it easy for children to hop on any unlocked two-wheeler.

Because rental sessions are terminated on the app instead of latching a smart lock device found on other brands, many Ofo users do not lock up the bikes after they have completed their journey. These unlocked bikes are at the disposal of everyone, including children under 12 who do not have an online bank account.

“Kids fool around on these yellow bikes all the time, picking up bikes people forgot to lock. It’s time Ofo upgraded its registration system instead of being obsessed with user numbers,” said another Weibo user, Lucky_gjy.

Shanghai’s new guidelines say bike-sharing companies in the city are required to pay the medical expenses for any party injured by a careless rider of their bikes within seven days. The rules, which are open to public comment until mid-April, do not stipulate whether rental firms must accept liability if users are injured or killed while using rental bikes.