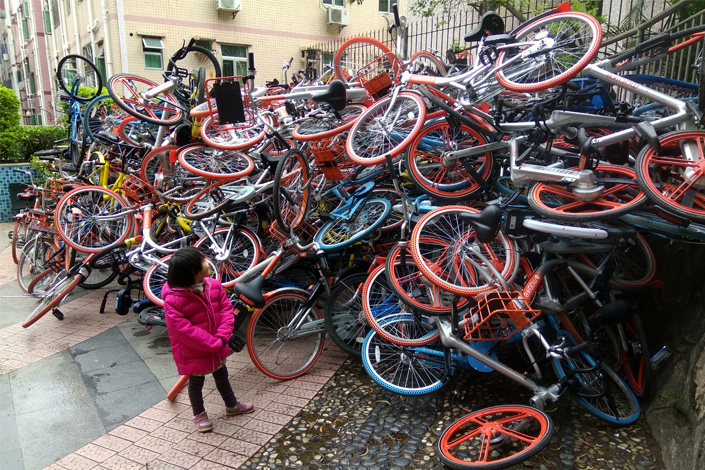 A pile of bicycles from bicycle-sharing companies sits in a park in Shenzhen, Guangdong province, on Jan. 16. Improper parking and malicious sabotage have become headaches for local authorities and the bike-sharing companies that have made more than 300,000 vehicles available for rental in the city. Photo: Visual China

It's an early-morning ritual in more than 20 cities across China: Crews in trucks working for bike-sharing companies cruise urban streets, pick up randomly parked bikes, and deposit them on sidewalks near subway stations.

The ritual is at the heart of a business model that's sparked an investment frenzy in China. The market’s leaders, Mobike and Ofo, alone have raised hundreds of millions of dollars in recent months.

On Jan. 4, Beijing Mobike Technology Co. Ltd. said it had raised $215 million from Chinese private investors on top of more than $100 million in previous commitments. In October, Ofo representatives announced a new round of financing, about $130 million, in addition to several rounds of funds earlier last year ranging from 1 million to tens of millions of U.S. dollars.

Investors who have gotten behind Mobike and Ofo see a bright future for bike-sharing in congested, traffic-jammed Chinese cities. Commuters exiting subway stations, for example, can rent the QR-coded bikes with a cellphone scanner and then pedal, rather than walk, to workplaces or apartments.

Questions have been raised about the business model’s future. Local governments recently started looking into tighter regulations for the emerging business. And in Shenzhen, according to recent media reports, bikes have been rented and discarded, leaving piles of two-wheelers in some neighborhoods.

Nevertheless, a variety of brightly colored bicycles — Mobike's bikes are tangerine orange, for example, and Ofo's are lemon yellow — are now a ubiquitous sight in many big cities. Moreover, millions of the companies’ apps had been downloaded by the end of 2016. Mobike alone claimed its weekly active app users reached more than 4 million in December.

The apps are relatively simple to use. As with most other bike-sharing apps, customers register using their national ID or passport details and use mobile wallets to pay a refundable deposit of 99 yuan ($14.40) for Ofo and 299 yuan for Mobike.

The next step is where rivals Ofo and Mobike differ. Mobike’s GPS-equipped bicycles can be located through the app, which allows users to reserve nearby bikes for up to 15 minutes. Ofo, on the other hand, tracks its bikes by reading GPS data on users’ phones, so it can provide only rough estimates of how many bikes are in a given area.

Once a user finds a Mobike, they scan a QR code on the bicycle to unlock it, and pay either 1 yuan per half-hour for regular Mobikes or 0.5 yuan for Mobike Lites, which weigh less and come equipped with baskets. Ofo bikes, in contrast, are unlocked using a one-time code that users receive after entering a bike’s license plate number into the app. It’s slightly cheaper to ride an Ofo bike — students and university staff pay 0.5 yuan an hour, while other users pay 1 yuan.

When the ride is over, users can park the bikes virtually anywhere, as long as they’re not breaking any city rules. Mobike users must manually lock the bikes to end the rental period, while Ofo users tap an in-app button to end the ride.

Industry watchers say these companies are in a good position to profit from the craze — at least for now. Like other tech-related startups, though, bike-sharing companies have yet to prove profitable.

The app-related car-hailing company Didi Chuxing confronted similar challenges in its early years and today is “still struggling to become profitable,” Fortune Venture Capital executive Chen Quan told Caixin. “This is going to be a major worry for bike-sharing apps in the near future.”

When Mobike and Ofo executives started courting investors in early 2016, their plans were frequently met with skepticism. About a dozen venture capital funds rejected Mobike's initial offer, said a Mobike investor who preferred not to be named.

But Mobike found a friend in Panda Capital partner Mao Shengbo, who helped sell the business model to other investors.

“I received many WeChat messages from investors saying they had zero interest in bike-sharing projects,” Mao told Caixin. “Their reasoning was, ‘Why would private bike-sharing be worth investing in?’ ”

Hoping others would follow, Panda took a chance on Mobike in August as a lead investor in a financing round that raised $10 million.

Earlier, though, bike-sharing companies had struggled to grab the attention of venture capital (VC) funds and other investors. And they weren’t the only discouraged investor-seekers in early 2016, as funding opportunities for all kinds of companies dried up after the Shanghai stock market dipped in mid-2015 and again in early 2016.

China venture capital investment doubled between 2014 and 2015 to hit a peak of 129 billion yuan ($18.76 billion), according to the research firm Zero2IPO Group. The interest quickly faded.

“By May 2015, many VC funds had used up in a few months money that was meant to last them more than a year,” Mao said.

After a pause that lasted about a year, though, investors were generally ready to get back in the game. But good investment targets were few and far between before bike-sharing caught fire.

“For a while, there was really nothing good to invest in,” Mao said.

“In early September, most investors had taken a wait-and-see attitude," said Yuanjing Capital partner Liu Yiran, whose firm met Ofo and Mobike executives but initially declined to make a commitment.

“It was a frustrating time for both companies,” Liu said.

Yuanjing’s partners had a hunch that a major player such as Didi, which reportedly had been considering a foray into bike-sharing, might shake up the industry with a big investment. Acting on its hunch, Yuanjing became the lead investor in Ofo’s September financing round.

But Didi bumped Yuanjing while Liu was on an ill-timed business trip to Singapore. “By the time I returned to China," he said, "Didi was on the Ofo board.

Didi said on Sept. 26 it would invest “tens of millions of U.S. dollars” in Ofo. Previously skeptical investors responded by rushing to buy stakes, quickly pushing Ofo's valuation to $300 million from $150 million.

Liu thinks Didi’s vote of confidence assured investors that bike-sharing was here to stay. “They know that Didi will do what it can to keep Ofo alive,” he said.

Mobike rents well-designed two-wheelers, which cost around 3000 yuan each, while Ofo built its business on budget 350-yuan bikes for college students.

Ofo founder Dai Wei started the company in 2014 with a group of Peking University classmates. Today, its nearly 350,000 bikes can be rented in more than 20 cities and on more than 200 university campuses nationwide.

Mobike was launched a few months later by Joe Xia, a former Fiat Chrysler executive. He then recruited an Uber China executive, Davis Wang, to join as CEO. Today, the company has about 100,000 bikes each in Shanghai, Shenzhen and Guangzhou. It also offers thousands of bikes in seven other cities, and plans to roll out its first overseas fleet in Singapore this year.

Although a handful of smaller companies are also in the bike-sharing game, the Ofo-Mobike rivalry has dominated the field, leading some industry watchers to compare their relationship to the competition between ride-hailing companies that ended in August when Didi took over Uber China in a $35 billion deal.

Ofo and Mobike, like Didi and Uber, attracted investors willing to pour funds into a battle for market share. But the Ofo-Mobike rivalry does not involve anything nearly as costly as the driver subsidies paid by Didi and Uber during their war for loyal riders and drivers.

A big reason is that shared-bike ride can cost as little as 0.5 yuan, so there's not much room for company-subsidized discounts.

“Users don’t care if their ride will cost 1 yuan or 0.5 yuan,” said Qiming Venture Partners executive Huang Peihua. “The most important thing is that, when they need the bikes, the bikes are there.”