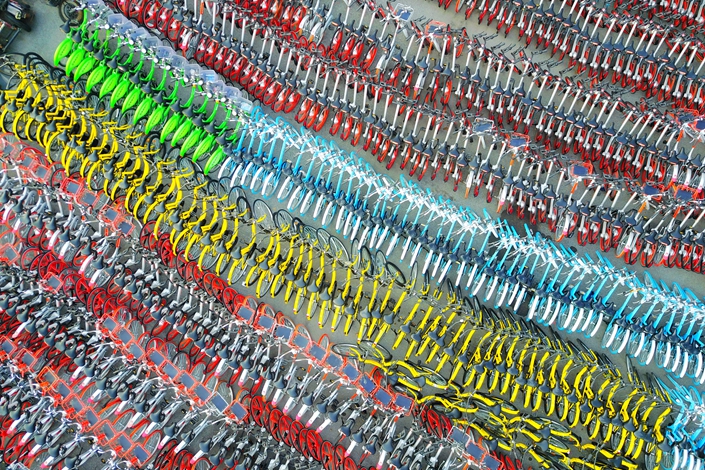 (Beijing) — Shanghai is asking a new generation of bike-sharing services to stop adding new two-wheelers to the city’s streets, in a bid to stop the city’s downtown area from being flooded by a tide of brightly colored bicycles.

The Shanghai Bicycle Industry Association issued a warning on its website, saying that the limited number of parking spaces in the city has been stretched to their limits by thousands of orange, yellow, blue and other brightly colored bikes from 12 operators.

The association said that 450,000 rental bikes — which can be unlocked using a smartphone app and charge a small fee for pedaling short distances — are scrambling for 20,000 available bike parking slots in the city. The two biggest operators, Ofo and Mobike, both said they hadn’t been notified about the request to stop placing new bikes in the city.

Irresponsible parking has been a cause of major complaints leveled at the startups since the shared-bike craze first took off last year. Rushing commuters and other negligent riders often haphazardly leave their bikes along sidewalks and street curbs, creating a nuisance for pedestrians and obstacles for drivers.

“Not only is it time to say ‘Cut!’ they need to get rid of some of the bikes already here. There’s no place to walk on the sidewalks, what a disaster!” said 310 Octopusbrother a Shanghai-based user on Weibo, China’s equivalent of Twitter.

Shanghai was the first city to become inundated by shared bikes when Mobike launched their first batch of 10,000 of its stylized gray and orange bicycles in the financial hub early last year.

Fueled with billions of yuan in venture capital, bike sharing firms have been racing to gain strongholds in China’s cities, often trying to outdo their rivals through sheer numbers. Truckloads of shiny bikes fresh off production lines are intermittently unloaded at busy subway stations and office buildings in major cities like Beijing and Shanghai, where users soon ride them off to various corners of the city.

“We remind bike operators to improve their dispatch capacities instead of trying to compete for users through quantity,” the statement said on the bike association’s website.

Operating costs for major firms such as Ofo and Mobike have grown as they struggle to manage and repair tens of thousands of bikes in the cities where they operate. But investors continue to give them cash, and the two market leaders have raised more than $1 billion combined in their brief lifetimes.

Earlier, the southern tech hub of Shenzhen issued a draft rule stipulating that the number of bikes operating in the city must not “exceed transport capacities”, which could also translate into putting a cap on the number of bikes.