Two Shared-Workspace Firms Merge Amid a Sector in Flux 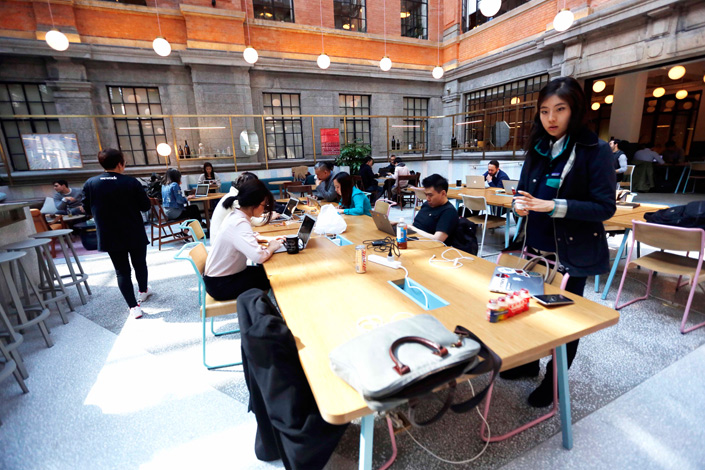 Workspace operators URWork and Hongtai New Space announced Wednesday that they have signed a merger agreement with a market value of about 9 billion yuan. Above, employees work at a WeWork co-working space in Shanghai on Feb. 28. Photo: IC

(Beijing) — Two Chinese shared-workspace operators have merged, creating a new giant in an industry in which foreign competitors have arrived and amid a decline in the number of startups that such spaces host.

URWork and Hongtai New Space announced Wednesday that they have inked a merger agreement with a market value of about 9 billion yuan ($1.3 billion).

Both companies were established in 2015, offering co-working spaces and incubation programs for startups. URWork operates 78 offices in 20 cities in China and abroad, according to Sinovation Ventures. New Space has landed nearly 20 spaces in more than 10 cities, incubating almost 200 projects.

The new entity, still operating under both brands’ own names, will expand globally to 24 cities in 2017, including Singapore, New York and London, they said in a statement. Their footprints will extend to 35 cities in three years.

The deal comes as U.S. rival WeWork, which was valued at nearly $16 billion after its latest round of fundraising a year ago, recently moved into the China market. It now runs five offices in Shanghai and one in Beijing, where two more are set to open in the next few months.

In March, WeWork co-founder Miguel McKelvey said during his China visit that the company plans to offer co-working spaces and community services to more than 6,000 members in China.

Competition is intensifying, as other big names, such as Tencent Holdings Ltd., Amazon.com and JD.com, as well as universities, are all operating their own incubators, accelerators and shared workspaces. The number of incubators has jumped from 500 in 2005 to more than 2,000 in 2015, according to consultancy iiMedia.

However, profitability has been difficult amid the rapid emergence. A co-working space founder told Caixin that most spaces in China have not made substantial profits, relying on leasing offices, not incubator projects, to provide revenue.

“As investors have become less active, and the economy slows, numerous co-working spaces will collapse this year,” the founder said.

Particularly painful for the shared workspace firms has been the decline in the number of new startups.