By Huang Shulun and Pan Che 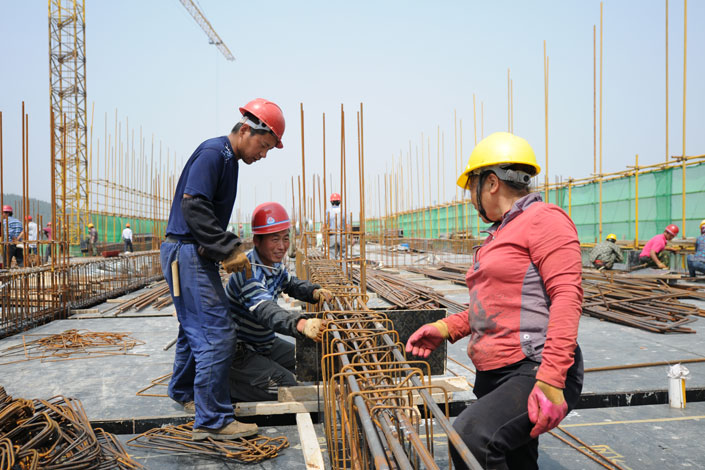 A recent official report indicates that the number of rural migrant workers working locally has risen by 26% over the past seven years. Photo: Visual China

(Beijing) — China’s workforce is staying closer to home, according to an official report that indicates the number of rural migrant workers working locally has risen by 26% over the past seven years.

The number of short-distance migrants increased 3.4%, or by 3.7 million, in 2016 to 112 million from 2015, while the number of long-distance migrants rose only 0.3%, down from a 0.4% increase in 2015 to stand at 169 million, according to the latest annual survey of migrant workers published by the National Bureau of Statistics (NBS) last week.

The survey, which sampled about 8,900 villages in rural areas across the country, also found that the number of rural laborers working in China’s cities rose by 1.5%, or 4.2 million year-on-year in 2016, to reach 282 million, accounting for 36% of the total number of people in employment in China, which was about 776 million by the end of 2016.

More than 88% of the increase came from short-distance migrants, the survey said.

The narrowing revenue gap between short- and long-distance migrants might offer some explanation for the rapid growth in the number of short-distance migrants in recent years. The survey found that although migrants working near their home area earned about 600 yuan ($87) less than their long-distance counterparts, their income grew at a faster pace.

Average income for the short-distance migrants stood at 2,985 yuan ($432) per month, up by 7.3% from 2015, one percentage point higher than the wage growth rate of long-distance migrants, who earned an average of 3,572 yuan per month.

The eastern area, which spans three municipalities — Beijing, Shanghai and Tianjin — and seven provinces, including Hebei, Jiangsu, Fujian and Guangdong, still represented the region absorbing most of the migrant workforce. In 2016, 160 million migrant workers were employed in the area, accounting for 56% of the total migrant workforce.

However, the eastern area is becoming less appealing to migrant workers, with data showing that the number working in that area dropped by 0.3% or half a million from 2015.

By contrast, migrant workers choosing to work in central and western areas increased by a combined 7.9% in 2016, accounting for about 40% of the entire migrant workforce.

In recent years, wage increases for migrants working in eastern China slowed due to downward economic pressure, NBS data showed. From 2011 to 2016, the annual growth rate of monthly income for migrants was down from 21% to 7.4% in the eastern area.

Rural migrant workers are not necessarily from rural areas but are workers with a rural household registration who are employed in an urban workplace. Many grew up in or were even born in cities, according to China Labour Bulletin, a Hong Kong-based worker rights group.

The hukou system, which was originally introduced by China in 1958 in order to control migration, started to relax its grip in the 1980s as China forged ahead with economic reform. Since then, thousands of rural workers have flooded into cities and towns, looking for jobs in various labor-intensive industries such as manufacturing, construction and services.

China’s spectacular economic growth over the past three decades owes much to migrant workers, but they still face many institutional barriers that prevent them and their children from having equal access to many public services in cities, such as health care and education.