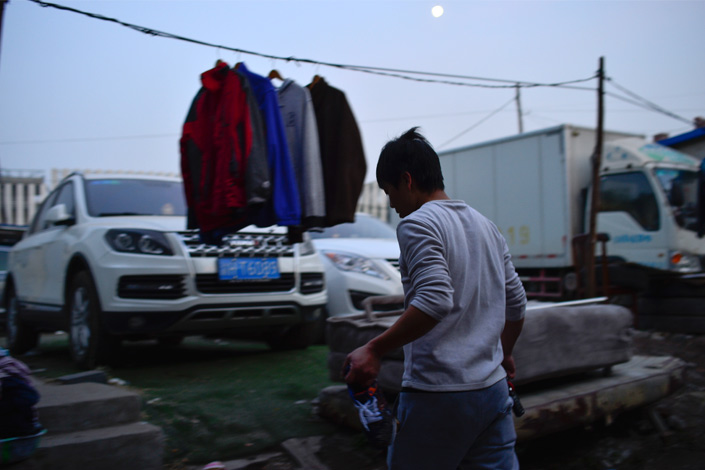 Zhang Jianwei, who doubles as a Didi driver and home-moving worker, hangs his laundry in a yard near his home in northwestern Beijing on Nov. 13. Photo: Yang Yifan/Caixin

(Beijing) — The higher-ups make policies, while those beneath find ways around them.

Didi Chuxing drivers in Shanghai and Beijing can be excused if they clutch to this often-repeated mantra in the face of new rules that disqualify most of them from their jobs.

In regulations published last week, Beijing and Shanghai barred migrants as well as non-local vehicles from operating on online ride booking platforms like Didi, China’s ride-hailing juggernaut that dominates over 80% of the market. The Beijing laws take effect in May, while Shanghai has already begun clamping down on ineligible cars and drivers.

The measures outlaw more than 9 out of every 10 of the 610,000 Didi drivers in two of China’s busiest cities. And many fear the change will be a devastating blow to the company that mostly relies on its sheer volume of rides to prop up a $34 billion valuation.

But the out-of-town drivers who flooded to first-tier cities to take advantage of the generous subsidies provided by ride-hailing companies are mostly unfazed by their new status as “illegal.”

Tai, who asked Caixin not to provide his full name, comes from Zhangjiakou in nearby Hebei province and operates a car with a Beijing license plate rented from a friend for 5,000 yuan ($719) a year.

“Whether or not I keep driving only depends on whether Didi will continue to dispatch orders to me,” he said breezily. “We’ve never been fully legal, and the traffic police never gave us a break, so there’s no real change for us."

Tai is referring to the fact that until November, ride-hailing was not even legal in China, and even after that, local authorities interpreted the regulations differently.

Dong, driving on Beijing’s Third Ring Road in a Honda Accord, is more cynical.

“The new rule boils down to one simple truth,” said Dong, who also asked that his full name not be used. “Instead of asking for one fat bribe from Didi, the government has opted to collect heaps of small bribes from each of the drivers. They’ve basically just written up legal backing for what they already do.”

Local authorities have been cracking down on online drivers and ride-hailing companies since the companies’ inception in 2013. Regulators and law enforcement agencies hold random roadside inspections, and even have plainclothes officers pose as passengers in order to pick out online drivers from traffic. Drivers are fined up to 30,000 yuan for “illegal operations.”

Until now, Didi’s policy has been to reimburse a portion of the fine each month to help keep the unlucky drivers on board. Drivers typically pay 25% of each fare back to the company.

Veterans of the cat-and-mouse game have devised ways to dodge roadside checks. Some, like a driver surnamed Zhao, have their wives sit in the front seat. He jokes that his wife acts as an amulet against roadside inspections during their late-night cruises. “They are less suspecting of a booked ride if there’s someone in the passenger seat,” he said.

Didi would not comment on the future of the bailout policy for non-local drivers, now that the law decrees them illegal.

Considering a future when Didi will no longer look after their fines, Tai said that he started looking for a job in his old line of work, the car-rental business, which he left two years ago to become a full-time driver.

The new laws and the possibility of a nonrefundable fine will not be enough to drive off many who depend on Didi as a source of income. People like Guo, who asked that his full name not be used, are waiting to see how the laws will pan out on ground level.

“There’s no way the government can be dead serious about punishing every unqualified driver and car out there,” he said. “Ninety percent of the drivers would drop out, and with the handful of picky Beijing locals remaining, Didi might as well throw in the towel and shut down.”

Guo, registered as a resident of Henan province, is only giving rides “for leisure” while working a day job as a company driver. Even so, he’s reluctant to give up his gig. “I’m going to keep at it while I can,” he said. “It should be fine if I stay away from downtown.”

“The law enforcement costs are simply too high to cover every corner of the city,” said Zhao Jian, professor of management at Beijing Jiaotong University. “In the future, migrant drivers will probably stay in the city outskirts, where chances of getting caught are much lower. Making a living will still be tough.”

For those who don’t want to increase their chances of being caught while cruising on the roads, the easiest career change is to go underground.

A driver surnamed Wu, who asked that his full name not be used, arrived in Beijing nearly 20 years ago working as a trash collector before he saved up for a small Chinese-made sedan. Though he bought his car early enough to attain a Beijing license plate, he’s still registered as a resident of his hometown in Henan. He said he will go back to being a “black car,” or illegal, driver, which he did for five years, waiting at subway stations and communities to offer people rides.

“Doesn’t really matter to me, I usually make about 200 kuai (yuan) a day as a black-car driver, which is about the same as I do working on Didi after commission costs.”

Wu has no qualms over an illegitimate status. But he looks fondly back at the subsidy-war days, when he could earn nearly 30,000 yuan a month.

Didi gave a strongly worded response to the Beijing and Shanghai’s draft laws two months ago, predicting that residency and license-plate requirements would “more than double ride-share costs” and make users wait over 15 minutes for their ride to arrive. The platform also warned policy makers of potential social unrest as drivers are forced out of their jobs.

“Needless to say, Didi’s worst fear is that drivers will flee,” said Gu Dasong, director of transport law at China Southeast University. “But the company also needs to strike a subtle balance between supply and demand. If a good portion of the drivers leave, that means it can finally start charging ‘surge prices’ and turn a profit,” he said, referring to the practice of charging higher prices when demand peaks.

But for now, the ride-hailing behemoth is trying to retain its drivers, sending pacifying messages to assure them that the company is trying to buy time and haggle for less-stringent rules.

Didi declined to comment on whether it will take the initiative to weed out-of-town drivers and cars from the platform. New drivers in Beijing and Shanghai who register must have a local license plate, though applicants are not required to have a coveted Beijing or Shanghai hukou.

The company may even allow migrant vehicles and drivers where the law does not. Zhao Jian, the professor of management, believes that should governments require Didi to screen drivers or share information they hold about their drivers, the company could still easily harbor disqualified drivers. “It’s a question of simple programming (the computers) to make those ineligible invisible to regulators,” he said.

Beijing and Shanghai’s ban on migrant from ride-hailing platforms falls in line with an initiative to rein in the population of megacities. Having residents of nearby provinces flock to large cities for Didi subsidies runs against existing measures like demolishing cheap illegal accommodation and shuttering schools for migrant children in Beijing.

The Shanghai government could not have put it in plainer words.

“The explosion of the Shanghai population has taken a huge toll on the city’s resources and management. Therefore, the Shanghai government stipulates that online drivers must have local hukou,” it said.

Though the curb on non-locals may not hit the industry as hard as once feared, analysts say the laws are a serious detour on the road to Didi’s rumored plans for an initial public offering (IPO) in 2018.

“If an IPO is still possible, Didi needs to continue shifting its business to car rentals, buses and other services,” said Zhang Yi, CEO of consultancy iiMedia. “Regardless of how much orders will go down, regulation risks have proved to drive up operation costs, and this will shave down its valuation.”

Despite what drivers say, the moment of truth for migrant drivers really comes after the Spring Festival, said Zhang, who attended many government consultation sessions.

“It’s no coincidence that the laws were released a month before Chinese New Year, when migrants flock home,” Zhang said. “People may be reluctant to leave when they are still getting by in the city, but the real deliberation is whether they will come back.”