By Yang Ge and Huang Rong 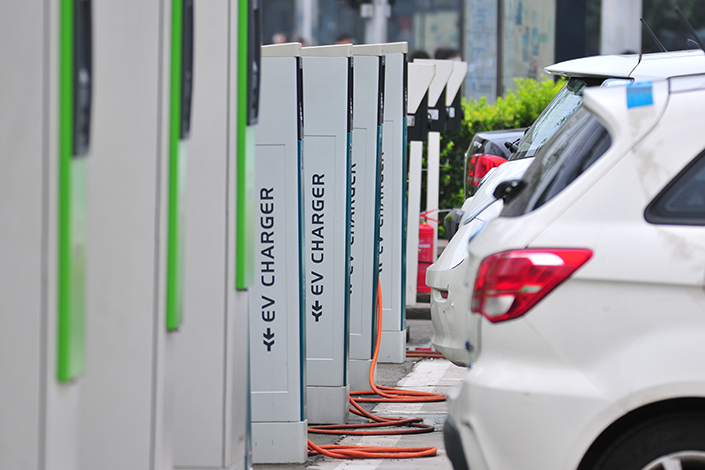 Cars line up at a new energy electric vehicle charging station in Zhongguancun Street in Beijing, China, on July 22, 2016. WKW Auto Parts plans to invest in a production base to develop and build high-quality new energy vehicles in Germany. Photo: Visual China

(Beijing) — Beijing WKW Automotive Parts Ltd. said it will invest up to 1.14 billion euros ($1.25 billion) to build an electric vehicle research and production base in Germany, as Chinese companies answer Beijing’s call to develop the new energy car sector.

WKW said it received permission late last year for the project from China’s National Development and Reform Commission (NDRC), the official state planner. The NDRC’s approval is necessary for all such major investments, especially in the current climate when Beijing is tightly controlling capital outflows to relieve devaluation pressures on its currency, the yuan.

The new company will be fully owned by WKW, and be called Delon Automotive GmbH. It will focus on high-end electric vehicle technology, the company said in a statement on Wednesday to the Shenzhen stock exchange. The base would be located in the city of Rothenburg in Germany’s eastern state of Saxony, which is home to facilities from some of the country’s largest automakers.

“Based on authorization from the company board, the directors will set up a team to begin preparatory work for the project,” WKW said in the statement. It added that the company will have registered capital of 100 million euros, and will engage in production and development of motors and other components for electric cars, as well as maintenance and sales services.

The move comes as Beijing heavily promotes the development of new energy vehicles, including both electric cars and hybrids, in a bid to clean up the nation’s polluted air and create technologies that can someday be exported.

But the resulting rush by many companies into the sector, attracted by lucrative government incentives, has created a bumper crop of mediocre products and led to widespread fraud. As a result, Beijing has embarked on a campaign to weed out fraud, including large fines against some of the biggest offenders. It has also taken steps to shut down makers of lower-quality products.