By Kong Jie and Li Sijia 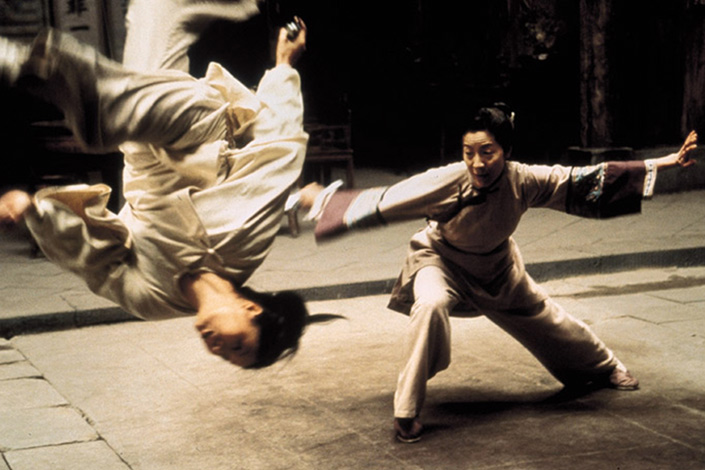 A poster shows a fight scene from the movie Crouching Tiger, Hidden Dragon for which Tan Dun wrote the soundtrack. Photo: IC

At the turn of the millennium, the surprise blockbuster hit Crouching Tiger, Hidden Dragon took American and European awards shows by storm. For Tan Dun, the composer of the film’s soundtrack, his near-total awards sweep — taking home a Grammy, British Academy Film Award and Academy Award in 2001 for his work — cemented his place as a musical icon and highly sought-after Hollywood composer.

Tan, 59, was again in the headlines earlier this month when he won a Golden Lion Award for Lifetime Achievement by the Board of the Venice Biennale.

But his upbringing couldn’t have been farther from the glitz and glamour of the world music stage. He grew up in rural Hunan province, and showed an early interest in the traditional shamanistic musical traditions that surrounded him. But his music education was cut short when he was sent to grow rice in a community farm, the Huangjin commune, under Mao Zedong’s 1960s program to have the country’s youth learn from farmers. But a chance boating accident that wiped out an entire traveling Peking opera jump-started his musical career. Tan, who had been involved in preserving the local musical traditions despite his farming duties, was called in to work with the troupe as its violinist and to arrange music for it. When Beijing’s Central Conservatory reopened after the Cultural Revolution, Tan was one of 30 students to secure a spot among thousands of applicants.

Since then, he has become known for an approach to music that draws natural audio elements, such as the sound of water, paper and stone, and the whir of technology. For example, at a concert in Singapore on April 20, Tan asked both the orchestra and audience members to take out their phones and play recordings of his latest symphonic poem Secret of Wind and Birds. The piece involves six traditional Chinese musical instruments, including the guzheng, suona and pipa, simulating the sounds of birds.

His broad body of work includes five operas, ranging in composition from non-narrative ritual performance to all-out theatrical epics. His 1996 opera, Marco Polo, in which Marco and Polo were conceived of as two separate characters in a sweeping nonlinear narrative commentary on the implications of the meeting of East and West in the 13th century, earned him a Grawemeyer Award for Music Composition, the most prestigious composing award, in 1998.

His career-long sensitivity to the visual elements of the experience of sound — and vice versa — made him especially suited for film composition. Besides Crouching Tiger, Hidden Dragon, Tan also produced the soundtracks for Zhang Yimou’s 2002 film Hero, the 1998 thriller Fallen starring Denzel Washington, and Feng Xiaogang’s 2006 feature, The Banquet.

But despite his ascent to Hollywood stardom, Tan remains strongly connected to and inspired by his Hunan roots. In 2013, he produced a piece titled Nu Shu: The Secret Songs of Women, which was the culmination of years of research and recording in his home province. In a series of 13 short films, presented in conjunction with a solo harpist and orchestra, Tan presents the sounds of the “Nüshu,” which literally means “the script of women.” Used exclusively by female speakers of the Shaozhou Tuhua dialect in Hunan’s Jiangyong county, it was a phonetic script devised and used between women who had traditionally been prevented from learning to read and write characters. Tan’s videos, which show aging users of the dying script singing in the language, were a product of his alarm at the fast-paced change and loss of culture in modern China.

In the following translated excerpts from an essay by author Kong Jie, Kong recounts a dinner party in snowy New York, where just days after taking home his Oscar, Tan shares his stories:

Except for Tan’s wife, everyone at the table that night was drinking. After a few rounds, the talk turned to Crouching Tiger, Hidden Dragon. The film’s director, Ang Lee, and Tan had been roommates in New York and were already close before working together on the film. Originally, Tan was to have a month to create the film’s score, but the situation changed, and Lee could give him only 10 days. Tan recalled being stunned. “I really can’t do it,” Tan told Lee, and the director almost broke down into tears. Tan said he then reluctantly accepted. It was so rushed that he hadn’t even had time to hear it himself when the final score was handed in for recording.

At the table, Tan lamented that in the past, directors regarded music as an extremely important artistic element. But in contemporary films, the pace is so fast that each musical section lasts only a few seconds. Fortunately, Lee had given him time. The music in Crouching Tiger, Hidden Dragon was 90 minutes long; in one scene the music lasted a full 10 minutes.

At this point, Tan’s wife chimed in, recalling how she had seen the rough cuts of some of the fight scenes in the movie and said they lacked power and punch. When the music was added, it was totally different. Tan Dun hurriedly interrupted her, “Don’t say that. People will think you’re bragging.”

Tan told the table that before accepting Ang Lee’s offer to compose for the film, he asked, “Will it be fun?” If so, he’d accept. For Tan, that meant, “Was it going to be a challenge?” He described the film as a project in experimental art, and that was the secret to its Oscar success. While the Chinese audience may have felt that the bouncing off walls while hanging on wires is a tired kung fu cliché, a Western audience can still see it as an artistic image.

I had always liked the film, and had even written an essay about it. I wrote about how the film drew upon imagery from Chinese ink paintings to present the concepts of “shan shui,” literally “mountain water,” to a Western audience. A later interview that I saw with Ang Lee confirmed this. In it, he said he had deliberately chosen the lightest possible film to shoot the movie on, to highlight the quiet and elegance of the traditional Chinese paintings whose imagery he was seeking to emulate.

Besides awing us, Tan Dun also made us laugh that night. He recounted the reaction of the U.S. Transportation Security Administration officer to the gold trophy in Tan’s bag on his way to New York from Los Angeles. “Is it real?” she asked Tan. “It’s real,” he had answered obediently. “Yeah, when I think about it, it was all Chinese faces on the TV yesterday,” she had replied.

Tan’s path to becoming a decorated composer began with the help of another guest at the party that night — actress and dancer Jiang Qing. As a 16-year-old in 1963, she had ventured to Hong Kong from the mainland and landed a role in a film by Taiwanese director Li Han-hsiang. Twenty years later, when Li became the first director from Taiwan to come to the mainland to shoot a movie, he called on Jiang to recommend a composer. The works sent by famous artists of the time were stilted and mediocre, a product of their Cultural Revolution-era education. So Jiang went directly to the schools to look for fresh talent. Sure enough, “the young phoenix drowned out the sound of the old phoenixes.” The Burning of the Imperial Palace made Tan a star in China’s music circles. It was his first film.

As they reminisced about old times, Tan emotionally exclaimed, “Jiang Qing, you are the most important woman in my life!” to which his wife smiled and said, “Jiang Qing, you must also be born in the year of the tiger,” in reference to Tan’s acceptance speech thanking his “two tigers at home.” (His wife and son are both born in the year of the tiger).

Talking about the music in Crouching Tiger, Hidden Dragon, Tan couldn’t help but become especially animated when Yo-Yo Ma came up. Tan had called on Ma to play on the soundtrack not because of his reputation or his magical cello. Tan saw Ma’s strength not in his ability to expertly play works of Haydn, Mozart or Dvorak, but in his capacity for grasping and exploring unchartered terrain.

“Yo-Yo Ma is a pure Chinese person,” Tan said. “Chinese culture has melted into his blood. Don’t be fooled by the fact that he is always in the Western spotlight. If you plop him down in a Shandong village or an Inner Mongolian prairie tent, he will be just like a local. That he is so skilled with bowing the erhu is not a question of technique, but of the Chinese culture living in his bones.”

He and Ang Lee’s goal had always been to find a point of overlap between commercial films and fine art. For this, Ma was the ideal candidate.