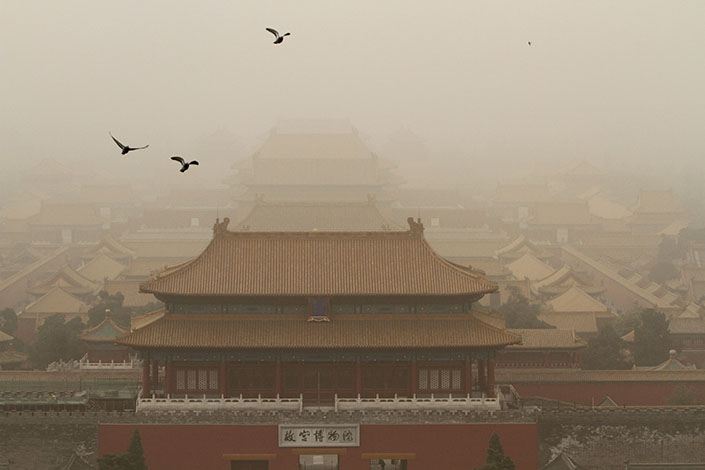 View of the Forbidden City in a sandstorm in Beijing, China, on May.4, 2017. A sandstorm swept over large swathes of north China including Beijing, turning the sky yellow and obscuring visibility. Photo: IC

(Beijing) — A raging sandstorm continued to batter much of China Friday, moving south after rendering air in much of the north, including the country's capital, severely polluted for nearly 30 hours.

The most severe dust storm to reach China’s capital in two years had affected an area of 1.65 million square kilometers, or nearly 17% of the entire country, by Thursday afternoon, according to the Ministry of Environmental Protection. Beijing lifted its sandstorm alert at around 11:30 a.m. Friday

But large amounts of dust blowing in on strong winds from the Inner Mongolia and Xinjiang regions continued Friday to exacerbate air pollution in many Chinese cities, according to the ministry.

Air pollution reached off-the-scale levels in numerous northern cities, becaming severely polluted by around 5 a.m. Thursday, the ministry said. The country’s Air Quality Index (AQI), which represents a weighted average of several toxic substances in the air, is capped at a maximum reading of 500.

Baoding, in the northern province of Hebei, is among the badly affected cities, with a PM10 reading of over 1,900 micrograms per cubic meter, real-time statistics from the ministry shows.

Over the past decades, fewer sandstorms have hit northern china, and have also become less intense. The number of dusty days in the capital dropped from 26 a year on average in the 50s, to around 7 days between 2001 and 2010 and again 3 days a year since 2011, statistics from

The sandstorm, the seventh affecting China this year hit Central and western parts of Inner Mongolia the worst with visibility in some areas dropping to less than 100 meters, according to the National Meteorological Center.