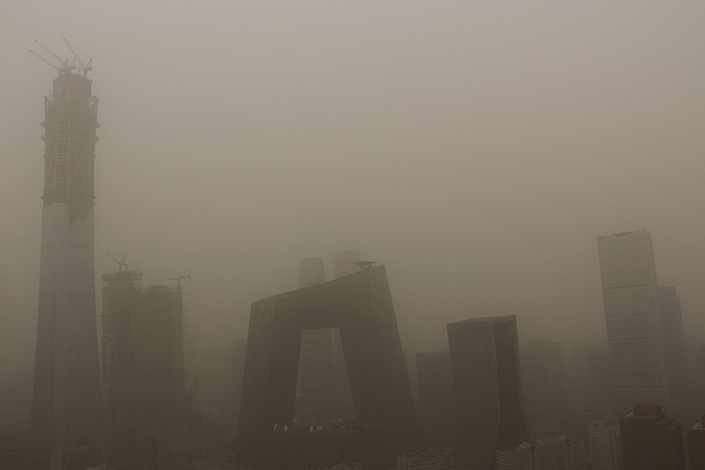 China Central Television building in down Beijing covered in thick, dusty on May 4. (Photo: Visual China)

(Beijing) — Air pollution in Beijing has once again hit serious levels as a sandstorm swept across northern China on Thursday, grounding dozens of flights at the world’s second-busiest airport.

Large amounts of dust blowing in on strong winds from the Inner Mongolia and Xinjiang regions will affect air quality and visibility in several provincial-level areas in northern China for 24 hours that began at 8 a.m. Thursday, according to the National Meteorological Center (NMC).

The sandstorm, the first to envelope the Chinese capital this year, has driven air pollution to off-the-scale levels in numerous northern cities, including Beijing, the Ministry of Environment Protection said. The country’s Air Quality Index (AQI), which represents a weighted average of several toxic substances in the air, is capped at a maximum reading of 500. But the level of PM10, the main pollutant in the latest bout of filthy air, surged over 2,000 micrograms per cubic meter of air at 8 a.m. on May 4, and the concentration of PM2.5 particulates was beyond 500, the ministry said.


Over the past decades, fewer sandstorms have hit northern china, and they've also become less intense. But toxic emissions from factories and vehicles, as well as dust from construction sites, have worsened the region’s air pollution problem.

At least 65 flights in and out of Beijing Capital International Airport had been canceled by lunchtime on Thursday, according to the airport’s real-time flight data system.

Central and western parts of Inner Mongolia are the worst-hit by the storm, with visibility in some areas dropping to less than 100 meters, the NMC said.