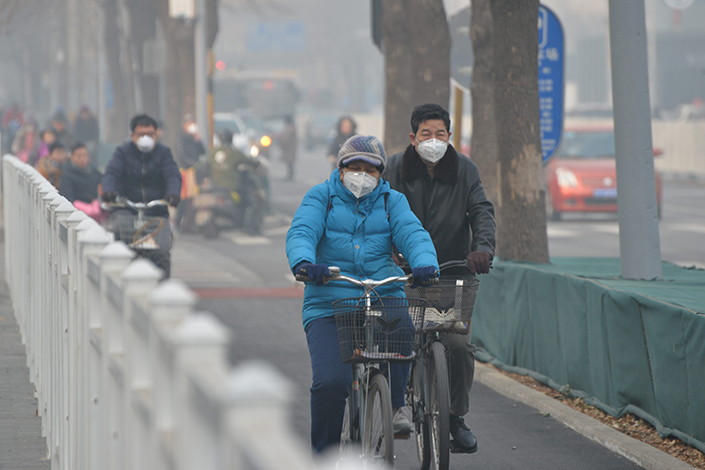 Bicyclists ride along Beijing's smog-shrouded Wangfujing Street on Dec. 31. The Ministry of Environmental Protection said the concentrations of PM2.5 and PM10 particulate matter in the Beijing-Tianjin-Hebei area rose sharply year-on-year in the first three months of 2017. Photo:IC

(Beijing) — Beijing’s air became more toxic in the first three months of the year, and the numbers of days with heavy pollution went up compared with the same period last year amid an uptick in manufacturing activity.

The Chinese capital and its neighbors — Tianjin and Hebei province — saw the concentration of PM2.5, a major air pollutant, rise by 26.7% from January through March, according to the Ministry of Environmental Protection. The number of blue-sky days dropped to 47 from 54 days in the same period last year.

In the same period and area, the level of PM10 — particulate matter with a diameter of 10 micrometers — rose by 17.6% to 147 micrograms per cubic meter of air.

The Beijing-Tianjin-Hebei area is home to nearly 8% of China’s population, with over 109 million inhabitants.

According to the WHO, both PM2.5 and PM10 particulates can penetrate deep into the lungs and the bloodstream and thereby increase the risk of lung cancer, heart attacks, asthma, premature delivery and birth defects.

The grim figures comes as another recent assessment by academics showed that air quality in northern China has not improved during winters over the past few years, even though authorities have spent millions to curb air pollution in the area.

The ministry attributed the spike in toxic pollutants to an uptick in industrial activity from January to March. The official Purchasing Managers’ Index (PMI) that is published by the National Statistics Bureau, which tracks orders and output, rose to 51.8 in March, up from 51.3 in January and 51.6 in February. That was the highest reading since April 2012 and well above the 50 mark that divides expansion from contraction.

Citing remote satellite imaging data, the ministry also said the concentration of nitrogen dioxide, a major pollutant from vehicle emissions, rose noticeably in both the Beijing-Tianjin-Hebei area and the Pearl River delta area.

Warmer weather in the Arctic region that resulted in weaker winds in northern China also resulted in more polluted days, the ministry said.

Six of the cities in Hebei, including provincial capital Shijiazhuang, were among the 10 most polluted cities in China in the first three months of the year, the ministry said.

Urumqi in the Xinjiang region, Xi’an in the northwestern province of Shaanxi, Taiyuan in the coal-rich province of Shanxi, and Zhengzhou in Henan province were the other four that made it to list of 10 cities with the worst air.

The Pearl River Delta includes nine cities, including Guangzhou and Shenzhen, and is home to over 40 million people. The number of blue-sky days in this region fell from 87 to 81 in the first three months of the year.